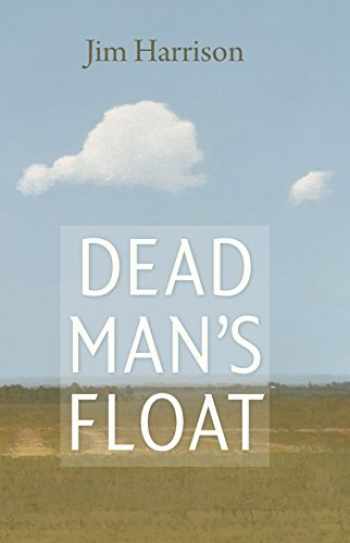 Acknowledged authors Harrison, Jim wrote Dead Man's Float comprising 156 pages back in 2016. Textbook and eTextbook are published under ISBN 1556594453 and 9781556594458. Since then Dead Man's Float textbook was available to sell back to BooksRun online for the top buyback price of $ 0.30 or rent at the marketplace.
Show more

Jim Harrison's final book of poems, published only a few months before his death

[Jim Harrison] is still close to the sourceDead Man's Float is, as its title would suggest, a flinty and psalmist look at mortality and wonder.”Los Angeles Times

”Mr. Harrison’s novels and poems over the last two decades have been increasingly preoccupied with mortality, never so much as in Dead Man’s Float, his very good new book of verse. Here he details the shocks of shingles and back surgery, as well as the comprehensive low wheeze of a fraying body The joys in Mr. Harrison’s world have remained consistent. If sex is less frequently an option, his appetites for food and the outdoors are undiminished. In one poem, he goes out into a rainstorm at night and sits naked at a picnic table. In another, he writes: 'I envied the dog lying in the yard/so I did it.' The title of this volume, Dead Man’s Float, refers to a way to stay alive in the water when one has grown tired while far from shore. As a poet, however, Mr. Harrison is not passively drifting. He remains committed to language, and to what pleasures he can catch.”Dwight Garner, The New York Times

Few enough are the books I decide to keep beyond a culling or two. Barring fire or flood, Dead Man's Float will be in my library for the rest of my life. If it's the last poetry collection we get from Harrisonand I hope it isn'tit is as fine an example of his efforts as any."Missoula Independent

"Harrison's poems succeed on the basis of an open heart and a still-ravenous appetite for life."The Texas Observer

"Forthright and unaffected, even brash, Harrison always scoops us straight into the world whether writing fiction or nonfiction [and] goes in deep, acknowledging our frailness even as he seamlessly connects with a world that moves from water to air to the sky beyond."Library Journal

Harrison pours himself into everything he writes in poems, you do meet Harrison head-on. As he navigates his seventies, he continues to marvel with succinct awe and earthy lyricism over the wonders of birds, dogs, and stars as he pays haunting homage to his dead and contends with age’s assaults. The sagely mischievous poet of the North Woods and the Arizona desert laughs at himself as he tries to relax by imagining that he’s doing the dead man’s float only to sink into troubling memoriesBracingly candid, gracefully elegiac, tough, and passionate, Harrison travels the deep river of the spirit, from the wailing precincts of a hospital to a green glade of soft marsh grass near a pool in a creek” to the moon-bright sea.”Donna Seaman, Booklist

Jim Harrison has been a remarkably productive writer across a multitude of genres His poetry is earthy, witty, keenly observed and tied closely to the natural world [and] mortality looms large in Dead Man’s Float, his 14th collection of poems [F]orceful, lucid, fearlessly honest, Harrison knows that the nearness of death intensifies life.”Arlice Davenport, Wichita Daily Eagle

This year we have two gorgeous
yellow warblers nesting in the honeysuckle bush.
The other day I stuck my head in the bush.
The nestlings weigh one twentieth of an ounce,
about the size of a honeybee. We stared at
each other, startled by our existence.
In a month or so, when they reach the size
of bumblebees they'll fly to Costa Rica without a map.

Jim Harrison (1937-2016) was one of America's most versatile and celebrated writers.