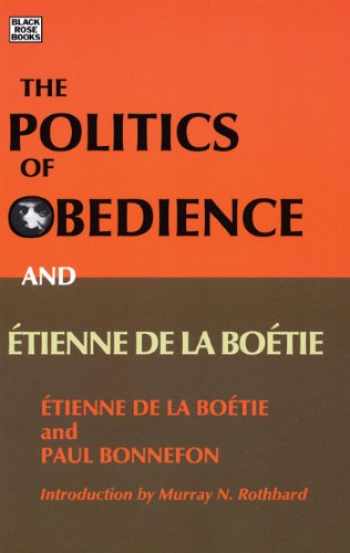 Politics of Obedience: The discourse of voluntary servitude

In 1550, at the young age of eighteen, Étienne de la Boétie wrote his reply to Machiavelli's The Prince. In it he sought to answer the question of why people submit to the tyranny of governments. This classic work of political reflection, Discourse of Voluntary Servitude, laid the ground work for the concept of civil disobedience, and as such, has exerted an important influence on the traditions of dissidence from Thoreau and Ralph Emerson, to Tolstoy, to Gandhi. In his Discourse de La Boétie delves deeply into the nature of tyranny and into the nature of State rule. He cuts to the heart of what is, or rather should be, the central problem of political philosophy: the mystery of civil obedience. Why do people, in all times and places, obey the commands of government, which always constitutes a small minority of the society? Apart from the complete text of Discourse of Voluntary Servitude, this edition of The Politics of Obedience, includes, as well, a comprehensive 100-page biography, by Paul Bonnefon, on the life and times of de La Boétie. It was the only one ever written, and it has never before been published in English (previously published as the Introduction to Oeuvres Complètes Étienne de La Boétie, 1892, and long out of print). It is ironic that the works of Machiavelli, advisor to rulers, should enjoy widespread currency, while the libertarian La Boétie is muted. Hopefully, publication of his 1550 Discourse, with its superb introduction by Murray Rothbard, will right the imbalance. --Stanley Milgram, Obedience to Authority La Boétie's discourse is a highly significant essay on the ultimate source of political power, the origins of dictatorship, and the means by which people can prevent political enslavement and liberate themselves. --Gene Sharp, Politics of Nonviolent Action