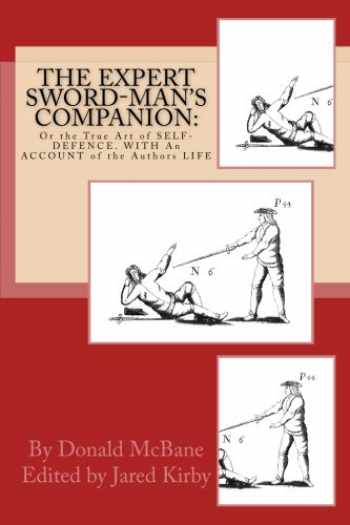 THE Expert Sword-Man's Companion: Or the True Art of SELF-DEFENCE. WITH An ACCOUNT of the Authors LIFE, and his Transactions during the Wars with France.: To which is Annexed, The ART of GUNNERIE

This new edition is a faithful transcription presented with meticulously restored illustrations.
Donald McBane was a Scottish Highlander and one of the most accomplished duelists of the 18th century. During the span of his extraordinary career as a soldier, prize fighter, fencing master, and brothel manager, McBane took part in 16 battles, 15 skirmishes, and nearly 100 duels or personal combats. He published his book, The Expert Sword-Man’s Companion, in 1728 where he recounts it all.
The first section of McBane’s treatise covers the use of a large number of arms, including the backsword, small-sword, spadroon, quarterstaff, sword and targe, sword and buckler, Spanish rapier, Portuguese rapier, sword and dagger, Dutch knife, Lochaber axe, pike, halberd, falchion, sword and pistol, dueling pistol, and broadsword on horseback. No other known extant British fencing treatise published during the eighteenth century includes such an eclectic mix of weapons. McBane also includes a unique section on “dirty tricks” used by other swordsmen of the time, and methods of how to defend against them.
The second section of the book is McBane’s memoir of his adventurous life, declared by one historian to be “possibly, the most ingenuous autobiography in the English language.” In this new edition, many of the incredible details related by McBane have been verified for the first time. McBane claimed to have fought a total of thirty-seven prize fights, but he provides few details about them, mentioning the name of only one of his antagonists. Thanks to the diligent research of Ben Miller, numerous specimens of McBane’s original challenges are included in this publication. These contests pitted McBane against some of the most celebrated gladiators of the period, including James Miller (who later authored a treatise on fencing), the infamous (and nearly undefeated) James Figg, and even Figg’s fencing master, Timothy Buck.
This books provides a fascinating glimpse into the mind, life, times, and combative techniques of one of the eighteenth century’s most unusual and formidable real-life characters.