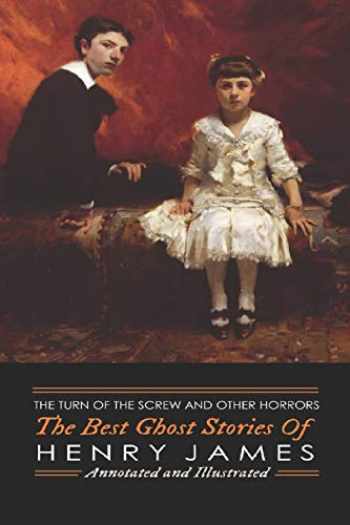 The Turn of the Screw and Other Horrors: The Best Ghost Stories of Henry James: Annotated and Illustrated (Oldstyle Tales of Murder, Mystery, Hauntings, and Horror) (Volume 9)

He was not one for terror, or even horror. His fiction is impressionistic, psychological, and "courtly," but it has one pervasive emotion to it: unease -- discomfort, awkwardness, and a lurking shame buried in intentional secrecy. The fear of truth. The terror of exposure, of reality and confrontation. Henry James has long been heralded as a master of transatlantic realism, a cosmopolitan observer of human nature, and a bone-dry contributor to the novel of manners – a blue-blooded chronicler of polite society’s stifled human dramas in the tradition of Jane Austen, Charles Dickens, Gustave Flaubert, Balzac, Turgenev, Tolstoy, Kipling, and de Maupassant – a thoroughly European pedigree befitting a man who left the United States in his youth and returned only twice before his death. And yet, for all his love of manners, whit, upper middle class malaise, and psychological realism, James returned time and time again throughout his career to a genre which seemed so at odds with his oeuvre: the Gothic ghost story. His most famous and influential supernatural tale, The Turn of the Screw, is considered by many – including Stephen King – to be the exemplar of the ghost story: a tale of haunted children, demonic possession, sexual frustration, and psychological terror. But this was not a one hit wonder: James wrote eighteen weird tales – most of which were ambiguously supernatural, and the best of this output is included in this volume – phantom women in black veils, haunted clothes guarded by a jealous ghost, evil doppelgangers with mutilated fingers, murderous portraits which ensure the family honor, sexually-charged liaisons between the living and the dead, a spectral stalker haunting the woman who drove him to suicide, and more.TALES INCLUDED in this ANNOTATED EDITION:The Romance of Certain Old Clothes | The Ghostly Rental |Sir Edmund Orme | Owen Wingrave | The Way it Came |The Real Right Thing | The Third Person | The Jolly Corner |The Turn of the Screw