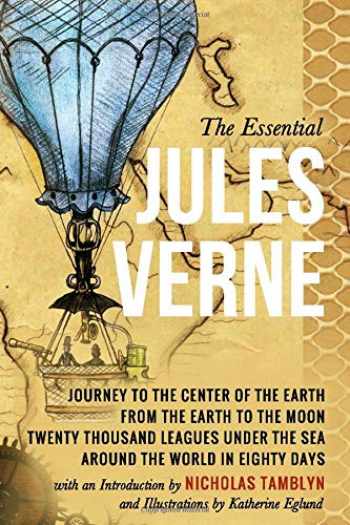 The Essential Jules Verne with an Introduction by Nicholas Tamblyn, and Illustrations by Katherine Eglund

Presenting The Essential Jules Verne: Journey to the Center of the Earth, From the Earth to the Moon, Twenty Thousand Leagues Under the Sea, and Around the World in Eighty Days with an introduction by Nicholas Tamblyn, and illustrations by Katherine Eglund. This collection is part of The Essential Series by Golding Books.

Jules Verne wrote in many styles and forms over his long career, yet it is in his great adventure novels that he shared an excitement about discovery and technologies past, present, and future that engaged readers then and now across the world like no other. We are bound and taken away on the ride, and the world is filled with exuberance and hope at its limitless possibilities, and in his singular work, as in few writers of any style, we grasp an uplifted and shared humanity.

He was called the "father of science fiction," and his books, early science fiction though they are, are so much more, and their resilience in remaining firmly at the forefront of popular culture after so many years is a testament to that. Not merely confined to labels such as space travel novel or boys fiction or sci fi classic (and the collection is the perfect gift for science fiction lovers), Verne has the power to touch each of us and perhaps even compel us to greater scientific understanding (and to better understanding the vital methods of science).

There is no age-limit on discovery and fascination with adventure and reaching new ground, and every year Verne finds new fans in every country around the world, female and male, old and young. His well-crafted compositions to the human spirit will always be celebrated wherever the love of good stories is to be found.

Jules Verne was born in Nantes in 1828. It was assumed that Verne, the first-born son, would follow in his father’s footsteps and become a lawyer, and in 1847 he went to Paris to study law. He was already writing both prose and poems however, and unfulfilled loves were a source of inspiration as much as misery. He used family connections to enter Paris literary salons, and also attended and wrote various plays. He revised a stage comedy with Alexandre Dumas, Les Pailles rompues (The Broken Straws), and the play opened in June 1850. He went on to write short and longer adventure stories with a basis in science that brought him increasing fame, including Cinq semaines en ballon (1863) (Five Weeks in a Balloon), Voyage au centre de la Terre (1864) (Journey to the Center of the Earth), De la terre à la lune (1865) (From the Earth to the Moon), Vingt mille lieues sous les mers: Tour du monde sous-marin (1870) (Twenty Thousand Leagues Under the Sea: An Underwater Tour of the World), and Le tour du monde en quatre-vingts jours (1873) (Around the World in Eighty Days). After suffering many ailments through his life, Verne died while ill with diabetes at his home in Amiens in 1905.