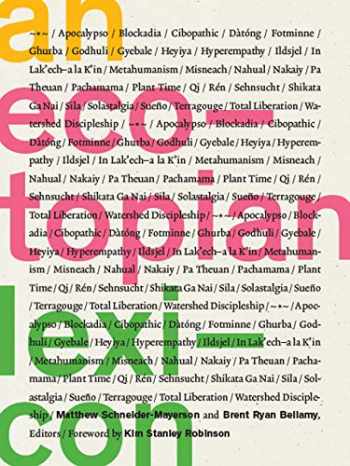 Acknowledged author wrote An Ecotopian Lexicon comprising 336 pages back in 2019. Textbook and eTextbook are published under ISBN 1517905907 and 9781517905903. Since then An Ecotopian Lexicon textbook was available to sell back to BooksRun online for the top buyback price of $ 5.24 or rent at the marketplace.
Show more

As the scale and gravity of climate change becomes undeniable, a cultural revolution must ultimately match progress in the realms of policy, infrastructure, and technology. Proceeding from the notion that dominant Western cultures lack the terms and concepts to describe or respond to our environmental crisis, An Ecotopian Lexicon is a collaborative volume of short, engaging essays that offer ecologically productive terms—drawn from other languages, science fiction, and subcultures of resistance—to envision and inspire responses and alternatives to fossil-fueled neoliberal capitalism.

Each of the thirty suggested “loanwords” helps us imagine how to adapt and even flourish in the face of the socioecological adversity that characterizes the present moment and the future that awaits. From “Apocalypso” to “Qi,” “ ~*~ “ to “Total Liberation,” thirty authors from a range of disciplines and backgrounds assemble a grounded yet dizzying lexicon, expanding the limited European and North American conceptual lexicon that many activists, educators, scholars, students, and citizens have inherited. Fourteen artists from eleven countries respond to these chapters with original artwork that illustrates the contours of the possible better worlds and worldviews.