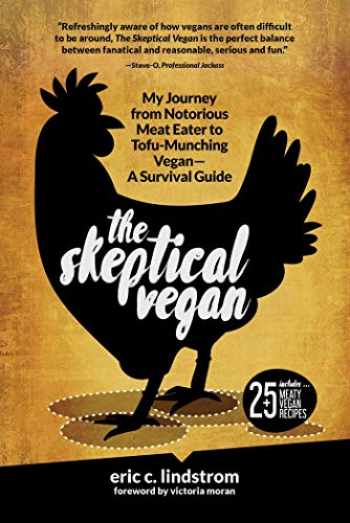 PETA's 2017 Vegan Cookbooks We Can’t Cook Without
Vegan Confessions of an Ex-Omnivore and His Survival Guide to Living Fully (Literally and Metaphorically).

Growing up in an all-women household and coddled endlessly by his Italian mother and grandmother, Eric Lindstrom was nourished to obesity on meaty sauces, fried eggs, and butter-laden cookies. After spending the first half of his life as an adamant omnivore, Lindstrom went 100% vegan. Reluctantly. Overnight. From burgers to beets, from pork to parsnips.

It’s time for a down-to-earth book that proves anyone can go vegan (even someone who once ate sixty-eight chicken wings in a sitting). How can a man adopt a vegan approach? Won’t he die of protein deficiency? What if he is married to a vegan woman? How would he order a salad at a Minnesota steakhouse? What should he bring to a gluten-free, nut-free, macrobiotic, nightshade-free, oil-free, vegan potluck (true story)?

Part confession and part survival guide, The Skeptical Vegan explains how simple it really is to be vegan, covering topics from food and nutrition to social challenges and lifestyle. Snarky, witty, and opinionated to a fault, Lindstrom speaks as a male vegan, contesting the notion that real men” should only eat meat. With twenty original veganized” recipes including portobello steaks, carrot hot dogs, tofu wings, meaty” chili, and cauliflower bites (which helped him shed thirty pounds), Lindstrom demonstrates how to take control of your diet while still eating meatily” and taking into account the ethical considerations of living a better life for the animals, the environment, and yourself.
Show more