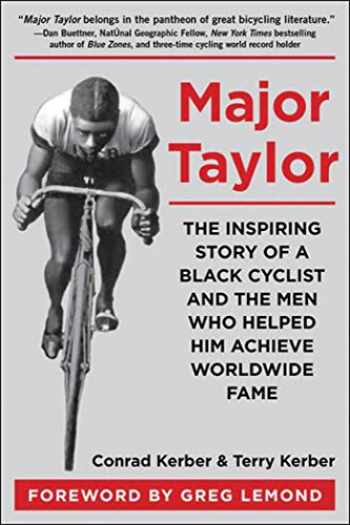 Major Taylor: The Inspiring Story of a Black Cyclist and the Men Who Helped Him Achieve Worldwide Fame

“Before Magic, before Ali, before Jesse Owens, there was Major Taylor. . . . This is a must read [for] anyone interested in the transcendent power of the bicycle as a vehicle of real freedom.”—Bob Roll, NBC cycling analyst and former professional cyclist

In the wake of the Tour de France’s fallen heroes, the story of one of history’s most legendary cyclists provides a much-needed antidote. In 1907 the world’s most popular athlete was not Cy Young or Ty Cobb. Rather, he was a black bicycle racer named “Major” Taylor.

In his day, Taylor became a spiritual and athletic idol. He was the fastest man in America, and a champion who prevailed over unspeakable cruelty. The men who aided him were among the most colorful to emerge from the era. First there was Taylor’s manager, pugnacious Irishman and famed Broadway producer William Brady. Then along came Arthur Zimmerman, an internationally famous bike racer, who gently mentored Taylor when some riders drew the color line and refused to race against him. When hotel and restaurant operators denied Taylor food and lodgings, forcing him to sleep in horse stables and race hungry, there was a benevolent racer-turned-trainer named Birdie Munger, who took Taylor under his wing and into his home. From the Old World came a rakishly handsome, mustachioed sports promoter named Victor Breyer, who lured Taylor overseas for a dramatic, Seabiscuit versus War Admiral–like match race that would be widely remembered a quarter century later.

With a foreword by World Champion and three-time Tour de France winner Greg LeMond, this spellbinding saga of fortitude, grace, forgiveness, and a man’s unyielding will to win against the greatest of odds is sure to become an classic that will be enjoyed by everyone.

Skyhorse Publishing, as well as our Sports Publishing imprint, is proud to publish a broad range of books for readers interested in sports—books about baseball, pro football, college football, pro and college basketball, hockey, or soccer, we have a book about your sport or your team.

In addition to books on popular team sports, we also publish books for a wide variety of athletes and sports enthusiasts, including books on running, cycling, horseback riding, swimming, tennis, martial arts, golf, camping, hiking, aviation, boating, and so much more. While not every title we publish becomes a New York Times bestseller or a national bestseller, we are committed to publishing books on subjects that are sometimes overlooked by other publishers and to authors whose work might not otherwise find a home.
Show more