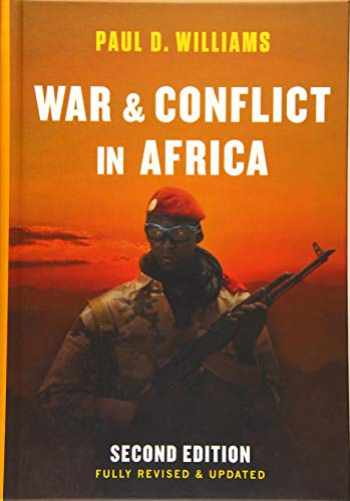 War and Conflict in Africa

After the Cold War, Africa earned the dubious distinction of being the world's most bloody continent. But how can we explain this proliferation of armed conflicts? What caused them and what were their main characteristics? And what did the world's governments do to stop them?

In this fully revised and updated second edition of his popular text, Paul Williams offers an in-depth and wide-ranging assessment of more than six hundred armed conflicts which took place in Africa from 1990 to the present day - from the continental catastrophe in the Great Lakes region to the sprawling conflicts across the Sahel and the web of wars in the Horn of Africa. Taking a broad comparative approach to examine the political contexts in which these wars occurred, he explores the major patterns of organized violence, the key ingredients that provoked them and the major international responses undertaken to deliver lasting peace.

Part I, Contexts provides an overview of the most important attempts to measure the number, scale and location of Africa's armed conflicts and provides a conceptual and political sketch of the terrain of struggle upon which these wars were waged.

Part II, Ingredients analyses the role of five widely debated features of Africa's wars: the dynamics of neopatrimonial systems of governance; the construction and manipulation of ethnic identities; questions of sovereignty and self-determination; as well as the impact of natural resources and religion.

War and Conflict in Africa will be essential reading for all students of international peace and security studies as well as Africa's international relations.