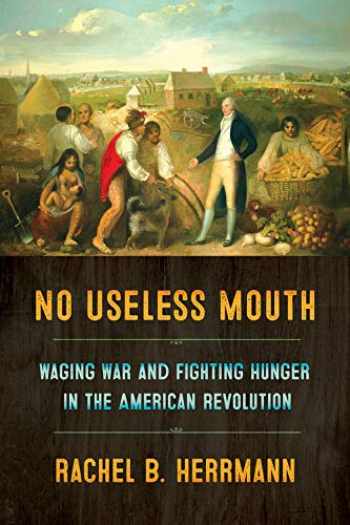 No Useless Mouth: Waging War and Fighting Hunger in the American Revolution

In the era of the American Revolution, the rituals of diplomacy between the British, Patriots, and Native Americans featured gifts of food, ceremonial feasts, and a shared experience of hunger. When diplomacy failed, Native Americans could destroy food stores and cut off supply chains in order to assert authority. Black colonists also stole and destroyed food to ward off hunger and carve out tenuous spaces of freedom. Hunger was a means of power and a weapon of war.

In No Useless Mouth, Rachel B. Herrmann argues that Native Americans and formerly enslaved black colonists ultimately lost the battle against hunger and the larger struggle for power because white British and United States officials curtailed the abilities of men and women to fight hunger on their own terms. By describing three interrelated behaviors―food diplomacy, victual imperialism, and victual warfare―the book shows that, during this tumultuous period, hunger prevention efforts offered strategies to claim power, maintain communities, and keep rival societies at bay.

Herrmann shows how Native Americans, free blacks, and enslaved peoples were "useful mouths"―not mere supplicants for food, without rights or power―who used hunger for cooperation and violence, and took steps to circumvent starvation. Her wide-ranging research on black Loyalists, Iroquois, Cherokee, Creek, and Western Confederacy Indians demonstrates that hunger creation and prevention were tools of diplomacy and warfare available to all people involved in the American Revolution. Placing hunger at the center of these struggles foregrounds the contingency and plurality of power in the British Atlantic during the Revolutionary Era.

Thanks to generous funding from Cardiff University, the ebook editions of this book are available as Open Access volumes from Cornell Open (cornellopen.org) and other repositories.