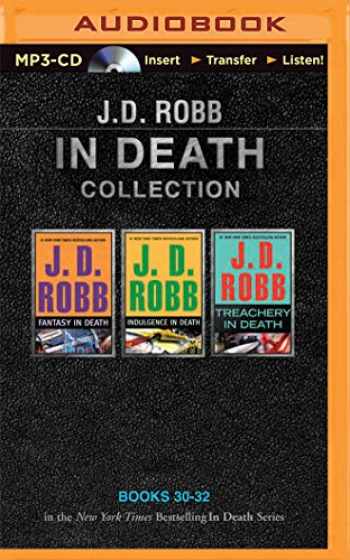 Fantasy in Death
Bart Minnock, founder of the computer gaming giant U-Play, enters his private room, and eagerly can’t wait to lose himself in an imaginary world, to take on the role of a sword-wielding warrior king, in his company’s latest top-secret project, Fantastical. The next morning, he is found in the same locked room, in a pool of blood, his head separated from his body. It is the most puzzling case Lieutenant Eve Dallas has ever faced, and it is not a game.… Eve and her team are about to enter the next level of police work, in a world where fantasy is the ultimate seduction—and the price of defeat is death.

Indulgence in Death
When a murder disrupts the Irish vacation she is taking with her husband, Roarke, Eve realizes that no place is safe—not an Irish wood or the streets of the manic city she calls home. But nothing prepares her for what she discovers upon her return to the cop shop in New York City.… A driver for a top-of-the-line limousine service is found dead—shot through the neck with a crossbow. The car was booked by an executive at a venerable security company whose identity had been stolen. Days later, a stunning, high-priced escort is found killed at Coney Island, a bayonet stuck in her heart. And again, the trail leads to a CEO whose information has been hijacked. With a method established, but no motive to be found, Eve begins to fear that she has come across that most dangerous of criminals, a thrill killer, but one with a taste for the finer things in life—and death. Eve does not know where or when the next kill will be, or that her investigation will take her to the rarefied circle that Roarke travels in—and into the perverted heart of madness.…

Treachery in Death
Eve Dallas and her partner, Peabody, are following up on a brutal, senseless crime—an elderly grocery owner killed by three stoned punks for nothing more than kicks and snacks. And for the first time, Peabody is primary detective on the case, which means she has to get used to a new level of authority and responsibility. Good thing she learned the ropes from a master like Eve. But after rounding up the perps, Peabody stumbles upon a much trickier situation. Determined to start working out as hard as she grills suspects, she chooses to do it at the old, rarely-used gym at Central. After a grueling workout, she squeezes into one of the narrow shower stalls. Just after she shuts the water off, the gym door clatters open—and while she cringes inside the stall, trying not to make a sound, Peabody overhears two fellow officers, Garnet and Oberman, arguing. It doesn’t take long for a naked and vulnerable Peabody to realize that both officers are crooked—guilty not just of corruption but of murder as well. Eve Dallas may have trained Peabody well—but this is too dangerous for one person to take on alone. Now Peabody, Eve, and her husband, Roarke, must try to get the hard evidence they need to bring the dirty cops down—knowing all the while that the two have already killed to keep their secret, and are no doubt willing to do it again.