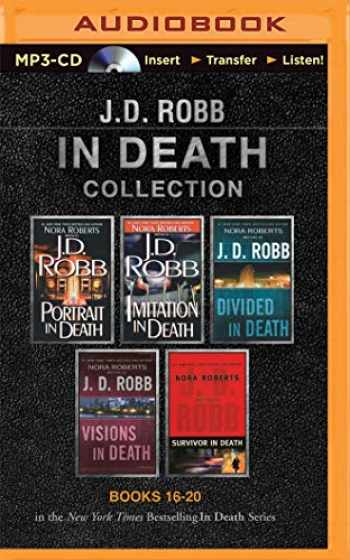 Portrait in Death
After a tip from a reporter, Eve Dallas finds the body of a young woman in a Delancey Street dumpster. Just hours before, the news station had mysteriously received a portfolio of professional portraits of the woman. The photos seemed to be nothing out of the ordinary for any pretty young woman starting a modeling career. Except that she wasn’t a model. And that these photos were taken after she had been murdered. Now Dallas is on the trail of a killer who’s a perfectionist and an artist. And he has a mission: to own every beautiful young woman’s innocence, to capture her youth and vitality—in one fateful shot.…

Imitation in Death
Summer, 2059. A man wearing a cape and a top hat approaches a prostitute on a dark, New York City street. Minutes later, the woman is dead. Left at the scene is a letter addressed to Lieutenant Eve Dallas, inviting her to play his game and unveil his identity. He signs it, “Jack.” Now Dallas is in pursuit of a murderer who wants to make his own mark. He has chosen his victim: Eve Dallas. And all Eve knows is that he plans to mimic the most infamous murderers of all—starting with Jack the Ripper.…

Divided in Death
Reva Ewing, a security specialist for Roarke Enterprises, is a prime suspect in a double homicide. But Lieutenant Eve Dallas believes Reva is innocent. Eve’s instincts tell her that the murder scene looks too perfectly staged, and when she digs for more, she discovers that all of the data on the victim’s computer has been corrupted. To Roarke, it’s the computer attack that poses the real threat. He and Reva have been under a code-red government contract to develop a program that would shield against techno-terrorists that hack into systems, steal data, corrupt computer units, and kill anyone who gets too close. Eve and Roarke must infiltrate an extraordinarily secretive government agency to expose the corruption at its core, before the virus spreads from one office to a corporation to the entire country.

Visions in Death
On one of the city’s hottest nights, New York Police Lieutenant Eve Dallas is sent to Central Park—and into a hellish new investigation. The victim is found on the rocks, just above The Lake in Central Park. Her hands are posed, as if in prayer. But it is the eyes—removed with such precision—that have Dallas most alarmed. As more bodies turn up, each with the same defining scars, Eve is frantic for answers. Against her instincts, she accepts help from a psychic who offers one vision after another. With help from her husband, Roarke, Dallas must uncover the killer’s motivation before another vision becomes another nightmare.…

Survivor in Death
Eve Dallas may be the best cop in the city, but the Swisher case has her baffled. The family members were murdered in their beds with brutal, military precision. Clearly, Dallas is dealing with pros. The only mistake they made was to overlook the nine-year-old girl cowering in the dark in the kitchen.… Now Nixie Swisher is the sole eyewitness to a seemingly inexplicable crime. Kids are not Dallas’s strong suit. But Nixie needs a safe place to stay, and Dallas needs to solve this case. Not only for the cause of justice. But also to put to rest some of her own darkest memories—and deepest fears.