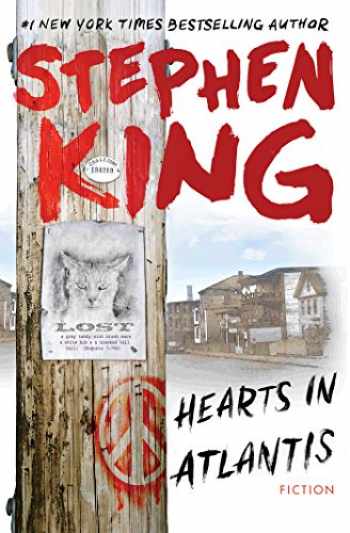 Acknowledged authors King, Stephen wrote Hearts in Atlantis comprising 688 pages back in 2017. Textbook and eTextbook are published under ISBN 1501195972 and 9781501195976. Since then Hearts in Atlantis textbook was available to sell back to BooksRun online for the top buyback price of $ 3.58 or rent at the marketplace.
Show more

Innocence, experience, truth, deceit, loss, and recovery are at the core of these five interconnected, sequential tales—each deeply rooted in the 1960s, and each scarred by the Vietnam War, which continues to cast its shadow over American lives, politics and culture.

In Part One, “Low Men in Yellow Coats,” eleven-year-old Bobby Garfield discovers a world of predatory malice in his own neighborhood. He also discovers that adults are sometimes not rescuers but at the heart of the terror.

In the title story, a bunch of college kids get hooked on a card game, discover the possibility of protest, and confront their own collective heart of darkness, where laughter may be no more than the thinly disguised cry of the beast.

In “Blind Willie” and “Why We’re in Vietnam,” two men who grew up with Bobby in suburban Connecticut try to fill the emptiness of the post-Vietnam era in an America which sometimes seems as hollow—and as haunted—as their own lives.

And in “Heavenly Shades of Night Are Falling,” this remarkable book’s denouement, Bobby returns to his hometown where one final secret, the hope of redemption, and his heart’s desire may await him.

“You will see Stephen King in a new light. Read this moving, heartfelt tragedy and weep—weep for our lost conscience.” —BookPage
Show more