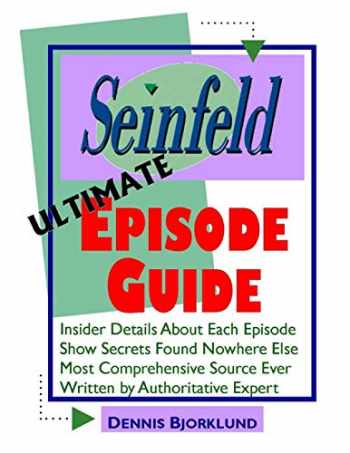 Acknowledged authors Bjorklund, Dennis wrote Seinfeld Ultimate Episode Guide comprising 192 pages back in 2013. Textbook and eTextbook are published under ISBN 1494405954 and 9781494405953. Since then Seinfeld Ultimate Episode Guide textbook was available to sell back to BooksRun online for the top buyback price or rent at the marketplace.
Show more

NEWLY REVISED, EDITED AND REPRINTED TO CORRECT ERRORS AND TYPOS ON December 10, 2017.

EVERY EPISODE IS SUMMARIZED WITH INTERESTING FACTS ABOUT THE SHOW

Seinfeld Ultimate Episode Guide is authored by a sitcom expert who penned the most comprehensive reference book that has ever been written about the show--Seinfeld Reference: The Complete Encyclopedia. This encore tome, Seinfeld Ultimate Episode Guide, is the best source for Seinfeld facts; no other source contains as much information. This type of thoroughness cannot be found anywhere else in the entire Seinfeld Universe.

Each episode is summarized in detail with supporting credits, such as writer, director, actors, and uncredited actors. The best part is insider information about each episode as well as little-known facts and unique trivia. There is even a section detailing some of the best known acting credits of every major character who appeared in a Seinfeld episode. Everything you need to know about each episode is in this book.

Seinfeld Ultimate Episode Guide provides insight into how some of the plots and subplots originated. You would be surprised how art imitates life. Discover which episodes have alternate endings, what scenes were deleted, how the creators handled cast changes, and so much more. There is even a section devoted to Awards won by the series, creators, actors and other individuals. Diehard fans will love the section devoted to technical credits for each season of the show.

It has all the names, titles, and details of all the men and women who worked behind the scene to make this the best show on TV. Find out which crew members made secret episode appearances as characters or extras. Seinfeld Ultimate Episode Guide is an essential book for every fan of the show. If you ever had a question about one of the episodes, the show, actors, or characters, this book has all the answers. Photos included, 194 pages.

For over 25 years author Dennis Bjorklund has been an accomplished and well-respected television authority who published many small screen books covering some of the best sitcoms in history. In addition to writing books, the author provides literary contributions to numerous entertainment magazines, and provides interviews as an authoritative expert for E! Entertainment and the Biography Channel.

He is the only television scholar to write thoroughly comprehensive books on Cheers and Seinfeld, which makes Bjorklund the only authoritative expert on these situation comedies. Here is the list of available books related to Cheers and Seinfeld that have been written by Bjorklund:

● Seinfeld Trivia: Everything About Nothing

● Seinfeld Trivia: Everything About Nothing: Multiple Choice

● Seinfeld Trivia: Everything About Nothing: Challenging

The author continues to reside in California to remain close to the heart of network television programming.