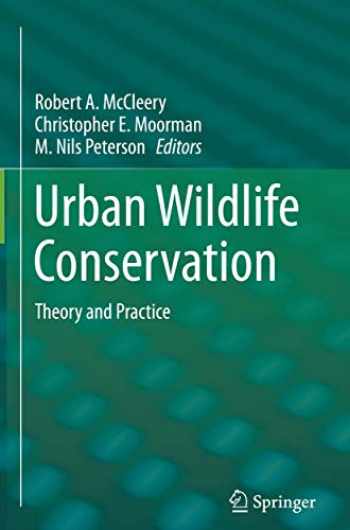 Acknowledged author wrote Urban Wildlife Conservation: Theory and Practice comprising 417 pages back in 2014. Textbook and eTextbook are published under ISBN 1489974997 and 9781489974990. Since then Urban Wildlife Conservation: Theory and Practice textbook was available to sell back to BooksRun online for the top buyback price or rent at the marketplace.
Show more

In the past, wildlife living in urban areas were ignored by wildlife professionals and urban planners because cities were perceived as places for people and not for wild animals. Paradoxically, though, many species of wildlife thrive in these built environments. Interactions between humans and wildlife are more frequent in urban areas than any other place on earth and these interactions impact human health, safety and welfare in both positive and negative ways. Although urban wildlife control pest species, pollinate plants and are fun to watch, they also damage property, spread disease and even attack people and pets. In urban areas, the combination of dense human populations, buildings, impermeable surfaces, introduced vegetation, and high concentrations of food, water and pollution alter wildlife populations and communities in ways unseen in more natural environments. For these ecological and practical reasons, researchers and mangers have shown a growing interest in urban wildlife ecology and management.

This growing interest in urban wildlife has inspired many studies on the subject that have yet to be synthesized in a cohesive narrative. Urban Wildlife: Theory and Practice fills this void by synthesizing the latest ecological and social knowledge in the subject area into an interdisciplinary and practical text. This volume provides a foundation for the future growth and understanding of urban wildlife ecology and management by:

• Offering a cohesive understanding of the coupled natural and social drivers that shape urban wildlife ecology,

• Proposing means to create physical and social environments that are mutually beneficial for both humans and wildlife.