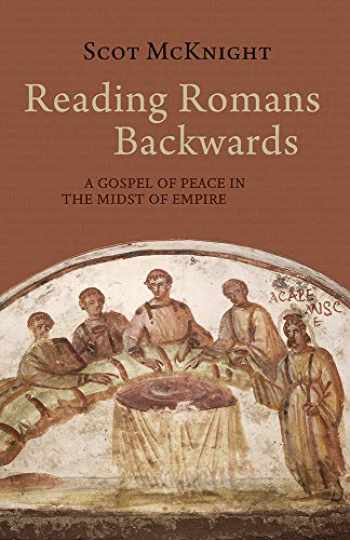 Reading Romans Backwards: A Gospel of Peace in the Midst of Empire

To read Romans from beginning to end, from letter opening to final doxology, is to retrace the steps of Paul. To read Romans front to back was what Paul certainly intended. But to read Romans forward may have kept the full message of Romans from being perceived. Reading forward has led readers to classify Romans as abstract and systematic theology, as a letter unstained by real pastoral concerns.

But what if a different strategy were adopted? Could it be that the secret to understanding the relationship between theology and life, the key to unlocking Romans, is to begin at the letter’s end? Scot McKnight does exactly this in Reading Romans Backwards.

McKnight begins with Romans 12–16, foregrounding the problems that beleaguered the house churches in Rome. Beginning with the end places readers right in the middle of a community deeply divided between the strong and the weak, each side dug in on their position. The strong assert social power and privilege, while the weak claim an elected advantage in Israel’s history. Continuing to work in reverse, McKnight unpacks the big themes of Romans 9–11―God’s unfailing, but always surprising, purposes and the future of Israel―to reveal Paul’s specific and pastoral message for both the weak and the strong in Rome. Finally, McKnight shows how the widely regarded "universal" sinfulness of Romans 1–4, which is so often read as simply an abstract soteriological scheme, applies to a particular rhetorical character’s sinfulness and has a polemical challenge. Romans 5–8 equally levels the ground with the assertion that both groups, once trapped in a world controlled by sin, flesh, and systemic evil, can now live a life in the Spirit. In Paul’s letter, no one gets off the hook but everyone is offered God’s grace.

Reading Romans Backwards places lived theology in the front room of every Roman house church. It focuses all of Romans―Paul’s apostleship, God’s faithfulness, and Christ’s transformation of humanity―on achieving grace and peace among all people, both strong and weak. McKnight shows that Paul’s letter to the Romans offers a sustained lesson on peace, teaching applicable to all divided churches, ancient or modern.