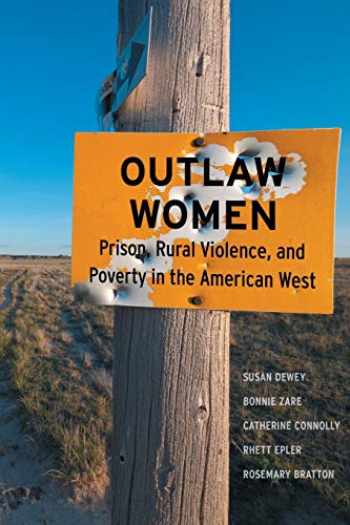 A journey into the experiences of incarcerated women in rural areas, revealing how location can reinforce gendered violence

Incarceration is all too often depicted as an urban problem, a male problem, a problem that disproportionately affects people of color. This book, however, takes readers to the heart of the struggles of the outlaw women of the rural West, considering how poverty and gendered violence overlap to keep women literally and figuratively imprisoned.

Outlaw Women examines the forces that shape women’s experiences of incarceration and release from prison in the remote, predominantly white communities that many Americans still think of as “the Western frontier.” Drawing on dozens of interviews with women in the state of Wyoming who were incarcerated or on parole, the authors provide an in-depth examination of women’s perceptions of their lives before, during, and after imprisonment. Considering cultural mores specific to the rural West, the authors identify the forces that consistently trap women in cycles of crime and violence in these regions: felony-related discrimination, the geographic isolation that traps women in abusive relationships, and cultural stigmas surrounding addiction, poverty, and precarious interpersonal relationships.

Following incarceration, women in these areas face additional, region-specific obstacles as they attempt to reintegrate into society, including limited social services, significant gender wage gaps, and even severe weather conditions that restrict travel. The book ultimately concludes with new, evidence-based recommendations for addressing the challenges these women face.