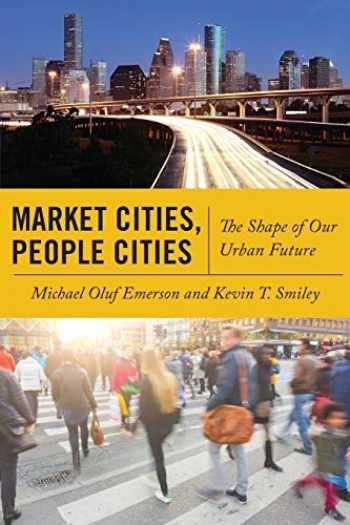 Market Cities, People Cities: The Shape of Our Urban Future

How are modern cities changing, and what implications do those changes have for city inhabitants? What kinds of cities do people want to live in, and what cities do people want to create in the future? Michael Oluf Emerson and Kevin T. Smiley argue that western cities have diverged into two specific and different types: market cities and people cities. Market cities are focused on wealth, jobs, individualism, and economic opportunities. People cities are more egalitarian, with government investment in infrastructure and an active civil society. Analyzing the practices and policies of cities with two separate foci, markets or people, has substantial implications both for everyday residents and future urban planning and city development.

Market Cities, People Cities examines these diverging trends through extended case studies of Houston, Texas as a market city and Copenhagen, Denmark as a people city, and draw on data from nearly 100 other cities. Emerson and Smiley track the history of how these two types of cities have been created, and how they function for governments and residents in various ways, examining transportation, the environment, and inequality, among other topics. Market Cities, People Cities also outlines the means and policies cities can adapt in order to become more of a market- or people-focused city. The afterword reflects on Houston’s response to the devastation caused by Hurricane Harvey in 2017.

As twenty-first century cities diverge, Market Cities, People Cities is essential for urban dwellers anxious to be active in their pursuit of their best cities, as well as anyone looking to the future of cities around the world.
Show more