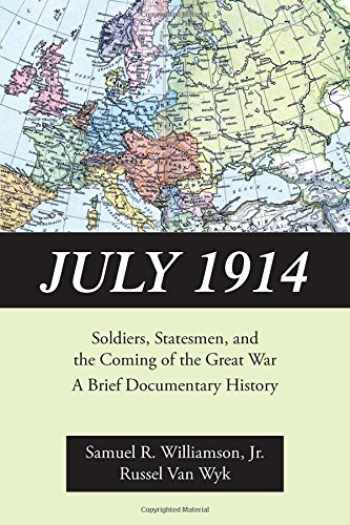 July 1914: Soldiers, Statesmen, and the Coming of the Great War-A Documentary History

Williamson and Van Wyk's carefully chosen primary documents memoirs, diaries, government documents, newspaper editorials, and other contemporary accounts introduce readers to the civilian and military leaders whose decisions contributed to events that led to World War I. The documents, along with the authors' scholarly, engaging analysis and insights, reveal personal and national conceptions of war and peace, militaristic impulses, and influential contextual factors, including alliance structures, arms races, and mobilization arrangements of the time. Coverage includes all the major powers of the war Austria Hungary, Germany, Russia, Italy, France, England, and Serbia.

The authors' conclusion that individuals, not monolithic governments and impersonal forces, made the decisions in the summer of 1914 that led to the First World War, is worthy of consideration in the current era of global tension and terrorism.

Title of related interest also available from Waveland Press: Lafore, The Long Fuse: An Interpretation of the Origins of World War I, Second Edition (ISBN 9780881339543).