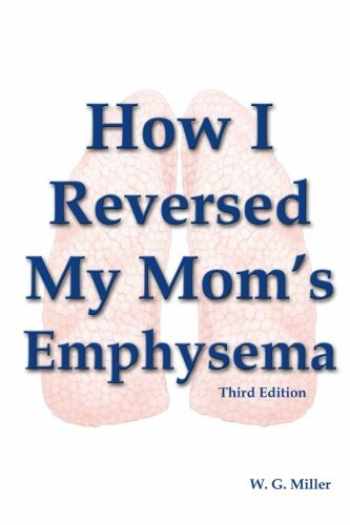 How I Reversed My Mom's Emphysema Third Edition

After my mother deteriorated down to End Stage I realized the drugs were not providing any lasting improvement in her condition. After 4 years and more than 6500 hours of research I developed a disease progression hypothesis that, I believe, describes the disease progression of COPD and emphysema.

The hypothesis is, Smoking introduces a pathogen into the lungs that begins proliferating immediately and continues proliferating even if the patient quits smoking."

I believe this is why so many people who have quit smoking years, even decades earlier, are diagnosed with emphysema and COPD. The pathogen continued proliferating even though they quit smoking!

Through a restrictive diet I borrowed from a successful cancer researcher and a prominent New York City physician, my mother began showing the first signs of improvement since her diagnosis! Two weeks after beginning the diet, signs of improvement were already visible!

Three months later, with the addition of specific supplements, she had re-gained 6 pounds and only required 3 liters of supplemental oxygen instead of 4! She was quite obviously on the road to recovery!

A little over a year later, she had completely recovered from emphysema and COPD!!

My mother's doctors stated, in no uncertain terms, that there was no way of reversing emphysema and COPD yet I was watching it happen right in front of my eyes!

Since that time, more than 2500 people in 10 different countries have successfully utilized these methods and the number is growing every day!

What People are Saying About the Book:

The day your book arrived I could not make it to the mailbox and back to the house once without sitting breathless in a chair for 15 or 20 minutes. I have been following the things you did for your mother for 13 days now and I can already make the trip 10 times without distress of any kind. This is amazing! Thank you for all your hard work.

I got your book for my father who has stage 4 emphysema. He was very sick and I truly did not think your book would work. There are a lot of charlatans on the internet these days but I bought it anyway. It was difficult to get my dad to change his diet and take all these supplements but he has already started improving a lot. Now you seem more like my hero. Thanks from the bottom of my heart.