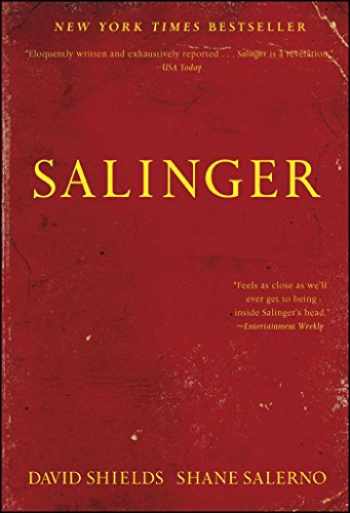 Acknowledged authors Shields, David, Salerno, Shane wrote Salinger comprising 720 pages back in 2014. Textbook and eTextbook are published under ISBN 1476744858 and 9781476744858. Since then Salinger textbook was available to sell back to BooksRun online for the top buyback price or rent at the marketplace.
Show more

An instant New York Times bestseller, this “explosive biography” (People) of one of the most beloved and mysterious figures of the twentieth century is “as close as we’ll ever get to being inside J.D. Salinger’s head” (Entertainment Weekly).

This “revealing” (The New York Times) and “engrossing” (The Wall Street Journal) oral biography, “fascinating and unique” (The Washington Post) and “an unmitigated success” (USA TODAY), has redefined our understanding of one of the most mysterious figures of the twentieth century.

In nine years of work on Salinger, and especially in the years since the author’s death, David Shields and Shane Salerno interviewed more than 200 people on five continents, many of whom had previously refused to go on the record about their relationship with Salinger. This oral biography offers direct eyewitness accounts from Salinger’s World War II brothers-in-arms, his family members, his close friends, his lovers, his classmates, his neighbors, his editors, his publishers, his New Yorker colleagues, and people with whom he had relationships that were secret even to his own family. Their intimate recollections are supported by more that 175 photos (many never seen before), diaries, legal records, and private documents that are woven throughout; in addition, appearing here for the first time, are Salinger’s “lost letters”—ranging from the 1940s to 2008, revealing his intimate views on love, literature, fame, religion, war, and death, and providing a raw and revelatory self-portrait.

The result is “unprecedented” (Associated Press), “genuinely valuable” (Time), and “strips away the sheen of [Salinger’s] exceptionalism, trading in his genius for something much more real” (Los Angeles Times). According to the Sunday Times of London, Salinger is “a stupendous work…I predict with the utmost confidence that, after this, the world will not need another Salinger biography.”