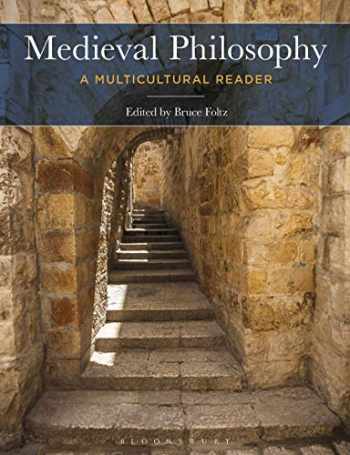 Acknowledged author wrote Medieval Philosophy: A Multicultural Reader comprising 736 pages back in 2019. Textbook and eTextbook are published under ISBN 1472580397 and 9781472580399. Since then Medieval Philosophy: A Multicultural Reader textbook was available to sell back to BooksRun online for the top buyback price of $ 3.20 or rent at the marketplace.
Show more

Medieval Philosophy: A Multicultural Reader comprises a comparative, multicultural reading of the four main traditions of the medieval period with extensive sections on Greek-Byzantine, Latin, Jewish, and Islamic traditions. The book also includes an initial 'Predecessors' section, presenting readings (with introductions) from figures of antiquity upon whom all four traditions have drawn.

Representative readings from each of the four great traditions are presented chronologically in four different tracks, along with engaging and accessible introductions to the traditions themselves, as well as each individual thinker-all selected and presented by noted scholars within each respective tradition.

This groundbreaking collection:
-Offers readings from early thinkers that contextualize the medieval traditions.
-Presents, for the first time, extensive readings from the Byzantine Christian tradition that has wielded an important cultural influence from Russia and the Balkans to the Middle East and Northern Africa.
-Chooses and interprets texts that are integrally important within each of these four traditions–living traditions that continue to shape values and beliefs today–rather than seen from an external point of view, such as that of a later school of philosophy.
-Juxtaposes extensive readings from poetic and mystical elements within these traditions alongside the usual, often more analytical readings.
-Features a timeline of the entire period, a map indicating the locations associated with philosophers included in this volume, an annotated guide to further reading on each of these traditions, and an index of names and of subjects that appear in the volume.

Given its relevance for approaching the medieval world on its own terms, as well as for understanding the foundations of our own world, the volume is intended not only as an academic textbook and reference work, but as a readable and informative guide for the general reader who wishes to understand these great philosophical and religious traditions that continue to influence our world today-or perhaps to simply glean the wisdom from these enduring texts.

This is a culturally inclusive title, which seeks to provide the reader with a rich, varied and comprehensive insight into the entirety of the medieval philosophical world.