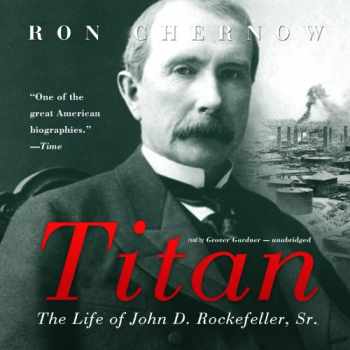 John D. Rockefeller, Sr., history's first billionaire and the patriarch of America's most famous dynasty, is an icon whose true nature has eluded three generations of historians. Now Ron Chernow, a National Book Award winning biographer, gives us a detailed and insightful history of the mogul. Titan is the first full-length biography based on unrestricted access to Rockefeller's exceptionally rich trove of papers. A landmark publication full of startling revelations, the book indelibly alters our image of this most enigmatic capitalist.

Born the son of a flamboyant, bigamous snake-oil salesman and a pious, straitlaced mother, Rockefeller rose from rustic origins to become the world 's richest man by creating America's most powerful and feared monopoly, Standard Oil. Branded the 'Octopus' by legions of muckrakers, the trust refined and marketed nearly 90 percent of the oil produced in America.

Rockefeller was likely the most controversial businessman in our nation 's history. Critics charged that his empire was built on unscrupulous tactics: grand-scale collusion with the railroads, predatory pricing, industrial espionage, and wholesale bribery of political officials. The titan spent more than thirty years dodging investigations until Teddy Roosevelt and his trustbusters embarked on a marathon crusade to bring Standard Oil to bay.

While providing abundant evidence of Rockefeller's misdeeds, Chernow discards the stereotype of the cold-blooded monster to sketch an unforgettably human portrait of a quirky, eccentric original. A devout Baptist and temperance advocate, Rockefeller gave money more generously than anyone before him -- his chosen philanthropies included the Rockefeller Foundation, the University of Chicago, and what is today Rockefeller University. Titan presents a finely nuanced portrait of a fascinating, complex man, synthesizing his public and private lives and disclosing numerous family scandals, tragedies, and misfortunes that have never before come to light.