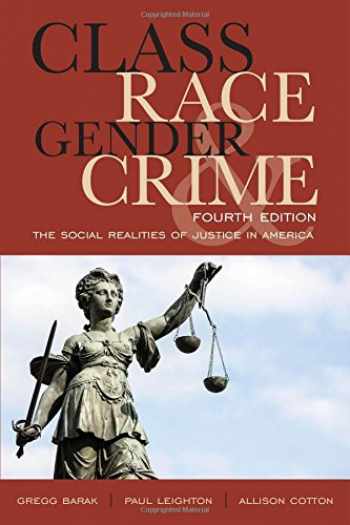 Class, Race, Gender, and Crime: The Social Realities of Justice in America

Class, Race, Gender, and Crime is a popular, and provocative, introduction to crime and the criminal justice system through the lens of class, race, gender, and their intersections. Almost 15 years after its first publication, the book remains the only non-edited book to systematically explore how the main sites of power and privilege in the U.S. consciously or unconsciously shape our understanding of crime and justice in society today.

The fourth edition maintains the overall structure of the third edition—including consistent headings in chapters for class, race, gender, and intersections—with updated examples, current data, and recent theoretical developments incorporated throughout. Part I has been significantly revised, first providing students with an overview of the criminal justice system, its actors, and actions, then introducing students to key theories of crime criminals. Part II provides foundational information about class and economic privilege, race/ethnicity and white privilege, gender and male privilege, and their intersections. Part III looks thorough these lenses at the topics of victimization, criminal law, policing and criminal prosecution, and punishment. The fourth edition also welcomes a new co-author, Allison Cotton, to the team of Gregg Barak and Paul Leighton.

The fourth edition of Class, Race, Gender, and Crime is a powerful introduction to the strengths and shortcomings of the criminal justice system.

A complimentary Instructor’s Manual and Test Bank is available. Contact textbooks@rowman.com for details.