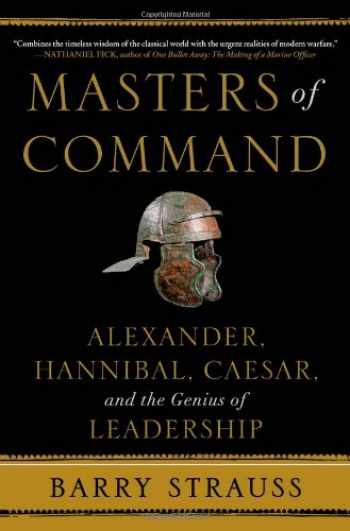 Masters of Command: Alexander, Hannibal, Caesar, and the Genius of Leadership

In Masters of Command, historian Barry Strauss compares how the three greatest generals of the ancient world waged war and draws lessons from their experiences that work both on and off the battlefield.

In Masters of Command, Barry Strauss compares the way the three greatest generals of the ancient world—Alexander, Hannibal, and Caesar—waged war and draws lessons from their experiences that apply on and off the battlefield.

Alexander, Hannibal, Caesar—each was a master of war. Each had to look beyond the battlefield to decide whom to fight, when, and why; to know what victory was and when to end the war; to determine how to bring stability to the lands he conquered. Each general had to be a battlefield tactician and more: a statesman, a strategist, a leader.

Tactics change, weapons change, but war itself remains much the same throughout the centuries, and a great warrior must know how to define success. Understanding where each of these three great (but flawed) commanders succeeded and failed can serve anyone who wants to think strategically or has to demonstrate leadership. In Masters of Command, Barry Strauss explains the qualities these great generals shared, the keys to their success, from ambition and judgment to leadership itself.

The result of years of research, Masters of Command is based on surviving written documents and archeological evidence as well as the author’s travels in Italy, France, Greece, Turkey, and Tunisia in the footsteps of Alexander, Hannibal, and Caesar.
Show more