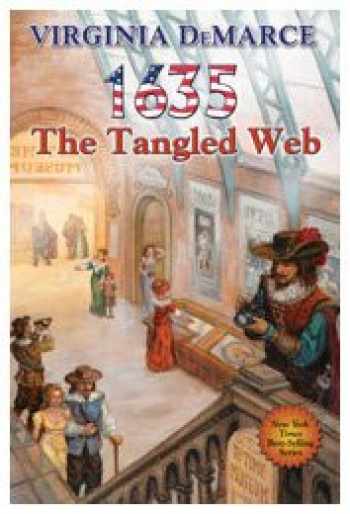 Acknowledged authors DeMarce, Virginia wrote 1635: The Tangled Web (Ring of Fire) comprising 368 pages back in 2009. Textbook and eTextbook are published under ISBN 1439133085 and 9781439133088. Since then 1635: The Tangled Web (Ring of Fire) textbook was available to sell back to BooksRun online for the top buyback price or rent at the marketplace.
Show more

Though the Thirty Years War continues to ravage 17th century Europe, history as it once happened has been strongly deflected by the new force which is rapidly gathering power and influence: the United States of Europe, an alliance between Gustavus Adolphus, King of Sweden, and the West Virginians from the 20th century led by Mike Stearns who were hurled centuries into the past by a mysterious cosmic accident—the Ring of Fire. .

The USE has the know-how of 20th century technology, but the American traditions of freedom and justice is having an even stronger impact on Europe, and the rulers of Europe are powerless to stuff the Grantville genie back into the bottle.

Virginia DeMarce, a trained historian and co-author of the New York Times best seller, 1635: The Bavarian Crisis, continues the saga of the time-lost Americans as seen through the eyes of both Americans and Europeans, as the Americans try to make sense of the strange world into which they have been hurled, and the Europeans try to understand the abilities and behavior of the visitors from the future. The result is a volume that will be irresistible to the thousands of fans of the Ring of Fire series.

Praise for 1634: The Bavarian Crisis by Eric Flint and Virginia DeMarce:

“. . . fascinating reading. . . . It is especially refreshing to read an alternate history that doesn't depend upon the clash of anachronistic arms, but rather on how modern ideas of human rights, education, sanitation and law might have affected the Europe of the 30 Years War.” —Publishers Weekly