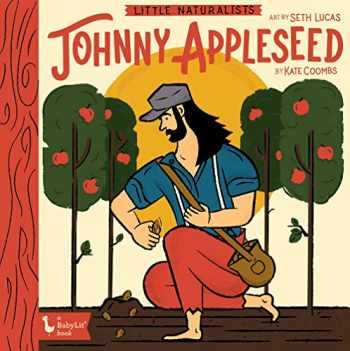 Acknowledged authors Coombs, Kate wrote Little Naturalists Johnny Appleseed comprising 22 pages back in 2020. Textbook and eTextbook are published under ISBN 1423654293 and 9781423654292. Since then Little Naturalists Johnny Appleseed textbook was available to sell back to BooksRun online for the top buyback price or rent at the marketplace.
Show more

Introduce your brilliant baby to the American icon Johnny Appleseed.

John Chapman, known as “Johnny Appleseed,” planted apple tree nurseries all over Pennsylvania, Ontario, Ohio, Indiana, Illinois, and West Virginia. He believed nobody should ever harm a living thing, so he advocated for animal rights, became a vegetarian, and planted seeds instead of grafting tree branches like most other orchardists. Kate Coombs and Seth Lucas recreate Johnny Appleseed’s adventures for young readers, encouraging them to Be Adventurous and to Be Kind to every person, animal, and plant they meet.

Kate Coombs is an award-winning author of original fairy tales, poems, middle-grade fantasy novels, and picture books, including the critically acclaimed Water Sings Blue, which won the Lee Bennett Hopkins Poetry Award for 2012, and seven books in the bestselling BabyLit series. She lives in Bountiful, Utah.

Carme Lemniscates is an award-winning author, illustrator, and designer of children’s books. In 2010 she founded Lemniscates Studio (www.lemniscates.com) in her home city of Barcelona to create her own children’s book projects, which she both writes and illustrates. Carme also illustrated best-selling author Jennifer Adams’ I Am a Warrior Goddess.