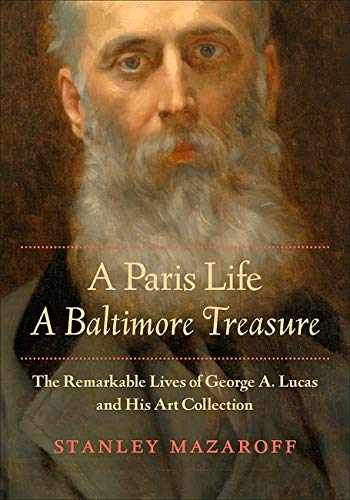 A Paris Life, A Baltimore Treasure: The Remarkable Lives of George A. Lucas and His Art Collection

The gripping biography of a man and his passion for art.

In 1857, George A. Lucas, a young Baltimorean who was fluent in French and enamored of French art, arrived in Paris. There, he established an extensive personal network of celebrated artists and art dealers, becoming the quintessential French connection for American collectors. The most remarkable thing about Lucas was not the art that he acquired for his clients (who included William and Henry Walters, the founders of the Walters Art Museum, and John Taylor Johnston, the founding president of the Metropolitan Museum of Art) but the massive collection of 18,000 paintings, drawings, sculptures, and etchings, as well as 1,500 books, journals, and other sources about French artists, that he acquired for himself. Paintings by Cabanel, Corot, and Daubigny, prints by Whistler, Manet, and Cassatt, and portfolios of information about hundreds of French artists filled his apartment and spilled into the adjacent flat of his mistress.

Based primarily on Lucas’s notes and diaries, as well as thousands of other archival documents, Stanley Mazaroff’s A Paris Life, A Baltimore Treasure tells the fascinating story of how Lucas brought together the most celebrated French artists with the most prominent and wealthy American collectors of the time. It also details how, nearing the end of his life, Lucas struggled to find a future home for his collection, eventually giving it to Baltimore’s Maryland Institute. Without the means to care for the collection, the Institute loaned it to the Baltimore Museum of Art, where most of the art was placed in storage and disappeared from public view. But in 1990, when the Institute proposed to auction or otherwise sell the collection, it rose from obscurity, reached new glory as an irreplaceable cultural treasure, and became the subject of an epic battle fought in and out of court that captivated public attention and enflamed the passions of art lovers and museum officials across the nation.

A Paris Life, A Baltimore Treasure is a richly illustrated portrayal of Lucas's fascinating life as an agent, connoisseur, and collector of French mid-nineteenth-century art. And, as revealed in the book, following Lucas's death, his enormous collection continued to have a vibrant life of its own, presenting new challenges to museum officials in studying, conserving, displaying, and ultimately saving the collection as an important and intrinsic part of the culture of our time.