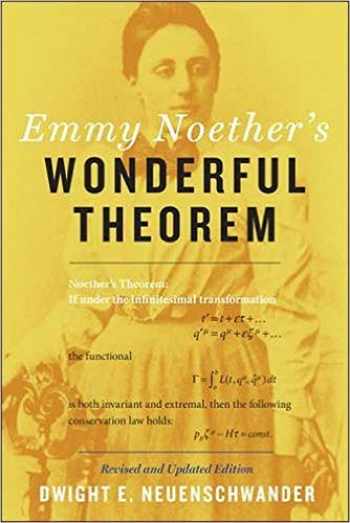 Acknowledged authors Neuenschwander, Dwight E. wrote Emmy Noether's Wonderful Theorem comprising 344 pages back in 2017. Textbook and eTextbook are published under ISBN 1421422670 and 9781421422671. Since then Emmy Noether's Wonderful Theorem textbook was available to sell back to BooksRun online for the top buyback price of $ 4.04 or rent at the marketplace.
Show more

One of the most important―and beautiful―mathematical solutions ever devised, Noether’s theorem touches on every aspect of physics.

"In the judgment of the most competent living mathematicians, Fräulein Noether was the most significant creative mathematical genius thus far produced since the higher education of women began."―Albert Einstein

The year was 1915, and the young mathematician Emmy Noether had just settled into Göttingen University when Albert Einstein visited to lecture on his nearly finished general theory of relativity. Two leading mathematicians of the day, David Hilbert and Felix Klein, dug into the new theory with gusto, but had difficulty reconciling it with what was known about the conservation of energy. Knowing of her expertise in invariance theory, they requested Noether’s help. To solve the problem, she developed a novel theorem, applicable across all of physics, which relates conservation laws to continuous symmetries―one of the most important pieces of mathematical reasoning ever developed.

In Dwight E. Neuenschwander’s new edition of Emmy Noether’s Wonderful Theorem, readers will encounter an updated explanation of Noether’s "first" theorem. The discussion of local gauge invariance has been expanded into a detailed presentation of the motivation, proof, and applications of the "second" theorem, including Noether’s resolution of concerns about general relativity. Other refinements in the new edition include an enlarged biography of Emmy Noether’s life and work, parallels drawn between the present approach and Noether’s original 1918 paper, and a summary of the logic behind Noether’s theorem.