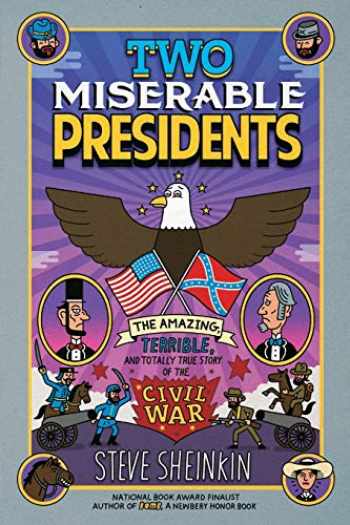 Two Miserable Presidents: Everything Your Schoolbooks Didn't Tell You About the Civil War

Get the feeling something big is about to happen? Welcome to the Civil War―one of the scariest, saddest, and occasionally wackiest stories in American History.

1856: Northern and Southern settlers attack each other in Kansas.
1858: Congressmen start sneaking guns and knives into the Senate chamber.
1860: President James Buchanan is heard wailing, “I am the last president of the United States!”

Unraveling a very complicated string of events--the small things, the personal ones, the big issues--Steve Sheinkin takes readers behind the scenes that led to The Civil War. It is a time and a war that threatened America's very existence, revealed in the surprising true stories of the soldiers and statesmen who battled it out.

“Chatty and accessible, this book does double duty: it introduces Civil War history for readers who don't know much about it and supplies browsable commentary for those familiar with the big picture...Beginning with a look at the role cotton played in the history, his fast-paced narrative is broken into short, tersely titled vignettes...The horrors of slavery and battlefield slaughter are clear, as are achievements of Harriet Tubman, Frederick Douglass, John Brown, and many more.” ―Booklist

Bomb: The Race to Build―and Steal―the World's Most Dangerous Weapon
The Notorious Benedict Arnold: A True Story of Adventure, Heroism & Treachery
The Port Chicago 50: Disaster, Mutiny, and the Fight for Civil Rights
Undefeated: Jim Thorpe and the Carlisle Indian School Football Team
Most Dangerous: Daniel Ellsberg and the Secret History of the Vietnam War
Which Way to the Wild West?: Everything Your Schoolbooks Didn't Tell You About Westward Expansion
King George: What Was His Problem?: Everything Your Schoolbooks Didn't Tell You About the American Revolution
Born to Fly: The First Women's Air Race Across America