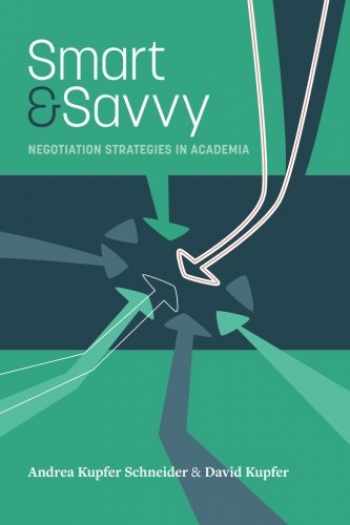 Acknowledged authors Schneider, Andrea Kupfer, Kupfer, David wrote Smart & Savvy: Negotiation Strategies in Academia comprising 180 pages back in 2017. Textbook and eTextbook are published under ISBN 0999306103 and 9780999306109. Since then Smart & Savvy: Negotiation Strategies in Academia textbook was available to sell back to BooksRun online for the top buyback price or rent at the marketplace.
Show more

The authors had each spent years working on career development and mentoring in their specific fields and then, over a decade ago, joined forces to offer negotiation training for those in the health sciences. David Kupfer, as chair of the world-renowned University of Pittsburgh Department of Psychiatry, had worked with younger scientists for years. The questions these scientists asked were often about their scientific hypotheses, how best to frame their research questions, how to understand the outcomes of their studies, and how best to present those outcomes, both in person and in writing. However, just as often their questions involved career concerns. What should a young female resident do about timing her next pregnancy when she feels the biological clock ticking but wants to take on a particularly demanding set of rotations because they seem essential to her career goals? How should a young faculty member who has just received his first research grant begin to gracefully establish his independence from the chief of his laboratory, who still sees him as someone to boss around? When Andrea Kupfer Schneider, a Harvard-trained negotiation professor for over 20 years, started helping her father with these conversations, they both noticed a startling gap: unlike their business and law school peers, academics generally receive no training in negotiation skills. This made no sense to Kupfer and Schneider: studies show that young scientists often fall off their career paths because they weren’t satisfied— but that the lack of satisfaction generally is less about science than it is about interpersonal challenges and workplace communication. The negotiation trainings they devised resulted in participants feeling more confident in asking for what they need to be successful. Even when they don’t get what they need, they say, now they can step back, analyze what happened, diagnose the situation, and strategize about how to improve for the next negotiation. In short, knowing more about negotiation has given them confidence that their skills can improve over time. As they completed their studies and negotiated in their workplaces, graduates of these early trainings asked for more advanced training, and the authors have been busy with tutorials, trainings, and lectures in medical schools and other university venues. Over what is now more than a decade of helping academics and scientists learn about negotiation, the authors have received many requests for a book that presents a framework for mastering negotiation skills and provides a pathway to improving such skills over time through practice and experience. The authors initially thought of writing a book for early career academics in medicine, but after much discussion—with colleagues, with former students, and others—they shifted to creating something more broadly applicable to different contexts and different life stages. They recognize that no one book can be all things to all people, but aim to address a wide audience of professionals at varying stages in their careers. They hope that in reading this book you will learn about negotiation styles and effectiveness, increase your self-understanding through the assessment tools in the appendices, think about how you would handle the challenges posed in the scenarios, and, most important, start to practice your negotiation skills. Becoming an effective negotiator is a journey, and they look forward to hearing about yours.