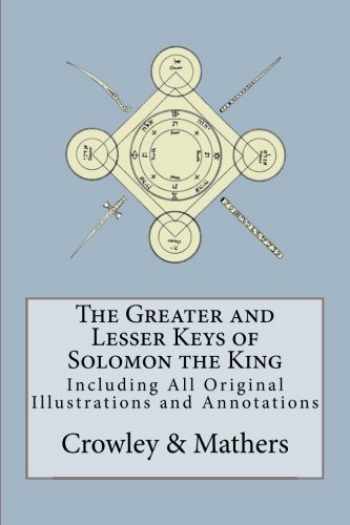 The Greater and Lesser Keys of Solomon the King

This trade paperback volume contains both The Key of Solomon the King (The Greater Key) and The Lesser Key of Solomon, including all of the original illustrations, diagrams and annotations to aid the reader in their understanding of the Solomon Key.

The Key of Solomon the King was originally researched and translated by S.L. MacGregor Mathers from ancient manuscripts in the British museums. Included by Mathers is the Order of the Pentacles of Solomon, the Ancient Fragment of the Key of Solomon, The Qabalistic Invocation of Solomon, and 15 plates full of figures, seals and charts, as well as the original text giving detailed instruction for spells and invocations.

The work is traditionally divided into two books detailing the Key of King Solomon. Book One explains the operation of conjurations, curses, spells and other magical works. Book Two instructs the practitioner on the proper attire, purification rituals and other means of obtaining the goals of the Goetia. Between these two books is the list of plates that contain numerous illustrations and secret seals of Solomon, including the Mystical Seal of Solomon, the Pentacles of Solomon, and the Mystical Alphabet, which impart the mechanisms and requirements for the invocation of spirits and demons.

The Lesser Key of Solomon, or the Clavicula Salomonis Regis, or Lemegeton, is a compilation of materials and writings from ancient sources making up a text book of magic or “grimoire.” Portions of this book can be traced back to the mid-16th to 17th centuries, when occult researchers such as Cornelius Agrippa and Johannes Trithemisus assembled what they discovered during their investigations into their own great works.

As a modern grimoire, the Lesser Key of Solomon has seen several editions with various authors and editors taking liberty to edit and translate the ancient writings and source material. In 1898, Arthur Edward Waite published his The Book of Black Magic and of Pacts, which contained large portions of the Lemegeton. He was followed by Mathers and Crowley in 1904 who published The Goetia: The Lesser Key of Solomon. Many others have assembled their own version of this ancient material since, and it is important to realize that it is the contents rather than the book itself that make up the Lesser Key. Traditionally, the source material is divided into five books: Ars Goetia, Ars Theurgia Goetia, Ars Paulina, Ars Almadel, and Ars Notoria. Mathers and Crowley indicate their edition is a translation of the first.

In the preface to this edition, it is explained that a “Secret Chief” of the Rosicrucian Order directed the completion of the book. The original editor was a G. H. Fra. D.D.C.F. who translated ancient texts from French, Hebrew, and Latin, but was unable to complete his labors because of the martial assaults of the Four Great Princes. Crowley was then asked to step in and finish what the previous author had begun. Traditionally, S. L. MacGregor Mathers is credited as the translator of this edition, and Crowley is given the title of editor.

Scholars believe these books of Solomon and their many iterations derive from the ancient practices of Jewish Kabbalah and Arab Alchemy. After time, it is thought Greek and Roman influences were added until, finally, the work was used and molded by high Renaissance magicians. This book, as well as other King Solomon books, such as the Magical Treatise of King Solomon and the Testament of Solomon, were brought back to modern times through the labors of occult practitioners such as S. L. MacGregor Mathers, Aleister Crowley and others around the turn of the last century.