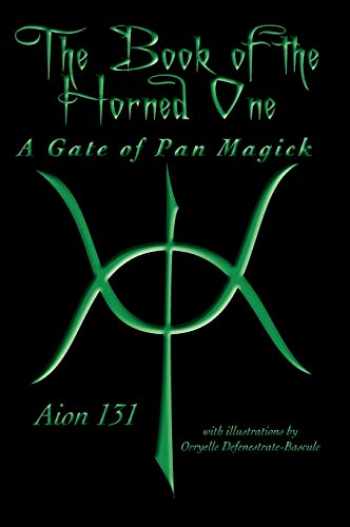 The Book of The Horned One: A Gate of Pan Magick

About the Book For me the most fundamental path, the most primal path, is that of the beginning, the Nameless (before speech), the Infinite (before time), The One who is All and None. There is no name for this, no label for the wild stirrings that fill and inform my mind, heart and body-so I call it Pan. In this way it has a presence, a body, a focus, a BEING, and so in this way I have been able to converse with, play with, make love with, consume and be consumed by the primal wilderness archetype that fills me, one that is truer than all other illusions. Through a mask the unnamable is approachable, and Pan is the ultimate mask of endless contradictions united, of seeing the divine in One, in All and in None -all at once. This book and its extremely loose and flexible system of magick (Called here 'Pan Magick' for want of a better name) is an intensely personal project. Let there be no doubt that it is an original system that draws from many wells, birthed from my interface with 'Pan'. At the peak moments of this dance, like when "The Book of Gate" came to me, 'I' was quite absent. Still, here 'I' am and It seems a whole crew of 'mes' is penning this book and all are, of course, mere illusions and refractions. The act of somehow piecing together notes and rites and somewhat inchoate scribblings from 30 years worth of practice has me wondering what I'm doing. But The Great Pan has laughed and beckons me on and urges me to get it together and get it out there, so away we go.--From the Introduction About the Author Aion 131, a writer, teacher and practicing Eclectic Ritualist, was first introduced to mythology and magick in New York where he grew up. He has since his early teens been accepted as a member of a number of initiatory groups and esoteric associations including Welsh Traditionalist Wicca, Pagan Way, Church of the Eternal Source, Church of all Worlds, the Typhonian OTO (ex-member), Q.B.L.H., Nath Tantric Lineage, Autonomatrix and Ordo Chaos among others and was a founding member of The Grove of the Star & Snake, the Horus Maat Lodge, Zos Kia Maati, Voxas Rimotae and the Nath Tantrika Emerald Zonule. He is an associate of the Sakya lineage of Tibetan Buddhism (Green Tara and 21 Tara empowerments) and the Voodoo Spiritual Temple of New Orleans. He was one of the founding editors of Mandragore, a journal of magick and eclectic ritualism published in New York, founding editor of Kalika, a Nath Tantric Journal, was an associate editor of Aeon Journal and was managing editor of Silver Star, an online journal of magick, for 5 years. He has an MA in Ancient History/Cross Cultural Communications and his research has included the magickal/religious traditions of Egypt, Sumeria, Greece, Rome, China, India, Europe and Pacific Northwest tribes (Kwakiutl). He has written for many different esoteric magazines as well as various magazines in Japan. He has engaged in extensive traveling and on-site research in 25+ countries all over the world and continues to do so. He is also an artist, clearly obsessed with sigils, glyphs and symbols, and whose main media are pen and ink and ceramics.