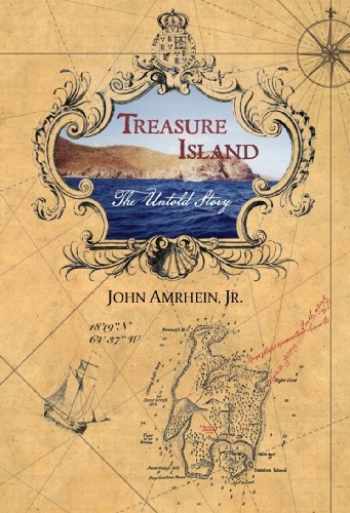 Acknowledged authors John Amrhein, Jr. wrote Treasure Island: The Untold Story comprising 396 pages back in 2011. Textbook and eTextbook are published under ISBN 0983084300 and 9780983084303. Since then Treasure Island: The Untold Story textbook was available to sell back to BooksRun online for the top buyback price or rent at the marketplace.
Show more

IT HAPPENED! In 1750, fifty-two chests of silver pieces of eight were stolen from a Spanish galleon at Ocracoke, North Carolina, and carried to the West Indies where most of it was buried on Norman Island, a deserted key in the British Virgin Islands. In 1883, Robert Louis Stevenson, published a fictional tale of adventure about an expedition to an unnamed Caribbean island to recover a treasure that had been buried there in 1750. On August 18, 1750, the Nuestra Señora de Guadalupe had left Havana, Cuba, for Cadiz, Spain, with a cargo valued at nearly a million pieces of eight. She had come from Veracruz, Mexico, where she had loaded her precious treasures. The Guadalupe had just completed another historic journey: she had delivered twenty Franciscan priests from Spain, one of which was the legendary Father Junipero Serra, who, through a miracle, saved the ship, her passengers, and her crew from certain doom on the feast day of St. Barbara. Father Serra went on to build nine mission churches in Southern California, leaving us with San Diego, San Juan Capistrano, and San Francisco, among others today. Without this miracle, no treasure would have been buried on a deserted Caribbean island in 1750 and there would have been no Treasure Island. After departing Havana, the Guadalupe was driven over five hundred miles from her intended course that would have taken her across the Atlantic to Spain. Instead, in early September 1750, she was delivered to Teach s Hole at Ocracoke Inlet, North Carolina, for her historic rendezvous with destiny. Just after the hurricane, Owen and John Lloyd, two respected merchant captains from Hampton Roads, Virginia, had departed for St. Kitts unaware of the detour their lives were about to take. Their sloop sprung a leak and diverted to the safety of Ocracoke Inlet where they encountered the disabled galleon. By an extraordinary chain of events, the Lloyd brothers found themselves entrusted to the rescue of over eight tons of silver pieces of eight and other riches by the bungling and arrogant galleon captain, Juan Manuel Bonilla. It was at this same location that the notorious Blackbeard had been killed thirty-two years before. But Blackbeard had to take a back seat to what was about to take place: the two brothers, who had been ravaged at the hands of the Spaniards in the recently ended King George s War, exacted their revenge on the galleon and sailed away with the treasure a haul that outdid the legendary pirate. Now, after nine years of investigation by an international team of researchers, Treasure Island: The Untold Story takes us back to Treasure Island just as Stevenson did in 1883. Only this time, it s not doubloons and pieces of eight that are uncovered but rather an incredible tale that up until now has remained buried in the dust of time.