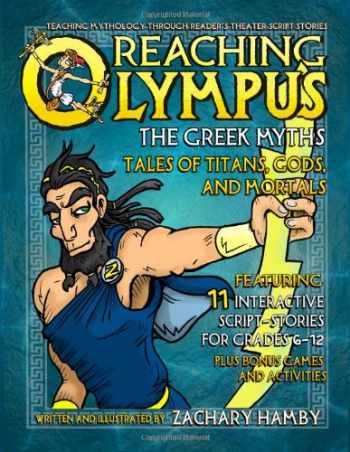 This volume of the Reaching Olympus series, Tales of Titans, Gods, and Mortals, is made up of 11 script-stories that re-tell favorite myths from Greek mythology. Readers can act out characters such as the mighty Heracles (Hercules), the beautiful Aphrodite, the foolish King Midas, and the monstrous Minotaur. Fun additions include a Mount Olympus Find-It picture puzzle and an interactive Tournament of the Gods game, where players create a mythology-based character and “do battle” with one another.

The Reaching Olympus series uses classroom-tested Reader's Theater script-stories specifically designed for 6-12th grade students to re-tell the great myths and legends of world mythology. Reader's Theater is an innovative and powerful teaching tool that allows students to break away from silent reading and actively participate in an "acting out" experience where words and myth come to life!

Each script-story is prefaced by a 2-page teacher guide providing a synopsis of the myth, relevant background information and commentary on the myth, anticipatory questions for pre-story discussion, essential questions to help analyze the "big ideas" behind each myth, recall questions to check reading comprehension, and instructions for teaching commonly-tested terms and literary devices using each script. Appendices include a glossary of important names and a pronunciation guide.

Zachary Hamby is an author, illustrator, and experienced educator. He has spoken at many conferences including the NCTE National Convention on the many benefits of using Reader's Theater in the secondary classroom. He currently teaches high school in the Ozarks where he lives with his wife and children.