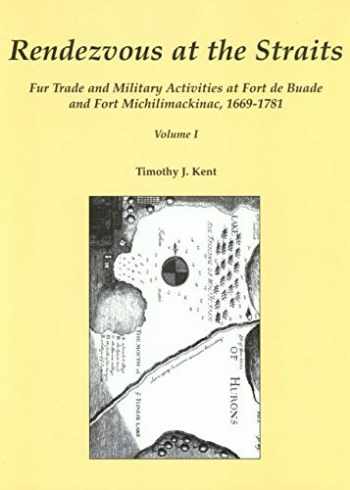 Rendezvous at the Straits: Fur Trade and Military Activities at Fort de Buade and Fort Michilimackinac, 1669-1781

For well over a century during the colonial era, the Straits of Mackinac, at the junction of Lakes Huron and Michigan, served as the very epicenter of activities in the northern interior of North America. At this locale, great numbers of native people and Europeans congregated each summer to trade. In addition, fur trade personnel acquired birchbark canoes, equipment, and provisions here for their far-flung journeys to other regions, and here they stored large amounts of westbound merchandise and eastbound furs and hides. From this central location at the Straits, native and European forces were dispatched on numerous occasions over the decades, to fight military campaigns far afield. Also, amy expeditions intent upon exploration or missionary efforts were launched from Mackinac.

Timothy Kent has located and translated large numbers of original French documents concerning these various activities, while he has also gathered most of the previously published ones as well. Through this extensive research, the author has woven a highly detailed, year-by-year chronicle of these many events, which focused upon the Mackinac area but occurred in the vast region which stretched from the home colony along the St. Lawrence Valley to the distant west and northwest. He has likewise compiled a similarly thorough account of the first two decades after British forces took control of North America in 1760. During this latter period, the fur trade of the French era actively continued, with gradually increasing British participation.

More than fifty original French documents are translated and published for the first time in this work. These include legal agreements, outfitters' ledgers, letters from traders, officers, and missionaries, inventories of trading stores and military forts, official government ordinances , and lists of materiel for native allies. Interweaving these documents with hundreds of previously published government and military reports, fur trade licenses, and travel accounts, Kent clearly presents the history of the period, and exposes many aspects of life during this era which are little known. These range from rampant prostitution to widespread trade in native slaves, from the huge amounts of illegal commerce to the realities of French-native relations.