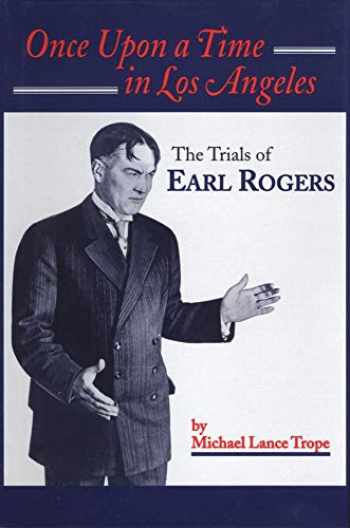 Once Upon a Time in Los Angeles: The Trials of Earl Rogers

Earl Rogers was born in upstate New York in 1869. Sworn into the practice of law in California in 1897, Rogers' prolific legal career in Los Angeles spanned twenty-one years, ending in 1918.

He defended the famous and infamous, including:

Rogers tried 77 murder trials, losing but three. In an era when there was no television, when radio and moving pictures were in their infancy, the daily newspapers of Los Angeles communicated the news to its citizens. Their coverage of Earl Rogers made him a man of great celebrity.

This book reveals Rogers through his most famous trials, including extensive quotes from the trial transcripts, biographical sketches of the participants, and analyses of the often amazing verdicts.

Handsome, brilliant and famous, he was also a raging alcoholic and a womanizer. His young daughter, Adela Rogers (St. Johns), who went on to achieve great fame as a writer and journalist, would often have the responsibility of looking for her father on the eve of a big trial, only to find him drunk in a sporting house. After a trip to the turkish baths, Rogers would be back in court doing battle brilliantly, only to disappear at trial's end for the process to repeat itself again and again.

Despite earning a huge fortune in legal fees as California's foremost trial lawyer, the cunning talented, charismatic and prolific Earl Rogers, a man whose words could move a jury from tears to laughter at will, died penniless in 1922 in a Los Angeles boarding house; a hopeless and broken-down drunk at the age of 52.