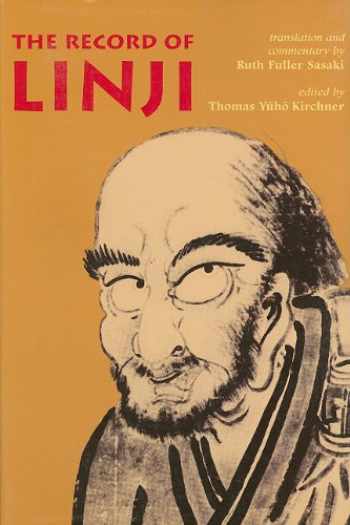 The Record of Linji (Nanzan Library of Asian Religion and Culture)

The Linji lu (Record of Linji) has been an essential text of Chinese and Japanese Zen Buddhism for nearly a thousand years. A compilation of sermons, statements, and acts attributed to the great Chinese Zen master Linji Yixuan (d. 866), it serves as both an authoritative statement of Zen’s basic standpoint and a central source of material for Zen koan practice. Scholars study the text for its importance in understanding both Zen thought and East Asian Mahayana doctrine, while Zen practitioners cherish it for its unusual simplicity, directness, and ability to inspire.

One of the earliest attempts to translate this important work into English was by Sasaki Shigetsu (1882–1945), a pioneer Zen master in the U.S. and the founder of the First Zen Institute of America. At the time of his death, he entrusted the project to his wife, Ruth Fuller Sasaki, who in 1949 moved to Japan and there founded a branch of the First Zen Institute at Daitoku-ji. Mrs. Sasaki, determined to produce a definitive translation, assembled a team of talented young scholars, both Japanese and Western, who in the following years retranslated the text in accordance with modern research on Tang-dynasty colloquial Chinese. As they worked on the translation, they compiled hundreds of detailed notes explaining every technical term, vernacular expression, and literary reference. One of the team, Yanagida Seizan (later Japan’s preeminent Zen historian), produced a lengthy introduction that outlined the emergence of Chinese Zen, presented a biography of Linji, and traced the textual development of the Linji lu. The sudden death of Mrs. Sasaki in 1967 brought the nearly completed project to a halt. An abbreviated version of the book was published in 1975, but neither this nor any other English translations that subsequently appeared contain the type of detailed historical, linguistic, and doctrinal annotation that was central to Mrs. Sasaki’s plan.

The materials assembled by Mrs. Sasaki and her team are finally available in the present edition of the Record of Linji. Chinese readings have been changed to Pinyin and the translation itself has been revised in line with subsequent research by Iriya Yoshitaka and Yanagida Seizan, the scholars who advised Mrs. Sasaki. The notes, nearly six hundred in all, are almost entirely based on primary sources and thus retain their value despite the nearly forty years since their preparation. They provide a rich context for Linji’s teachings, supplying a wealth of information on Tang colloquial expressions, Buddhist thought, and Zen history, much of which is unavailable anywhere else in English. This revised edition of the Record of Linji is certain to be of great value to Buddhist scholars, Zen practitioners, and readers interested in Asian Buddhism.