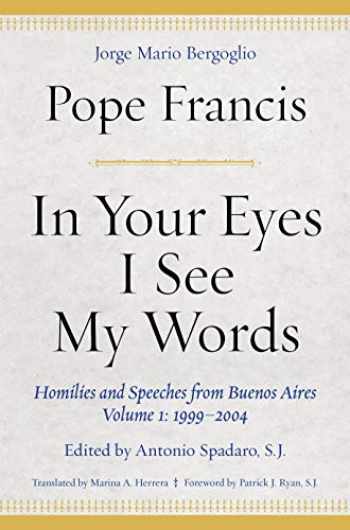 An extraordinary opportunity to understand the vision of Pope Francis

Pope Francis is a first in many ways: the first pope from the Americas, the first Jesuit, the first Francis, the first child of immigrants from the Old World, nurtured and transformed by the New World, and returned to lead the whole world. His eloquent homilies and speeches have inspired the faithful of Argentina for decades, largely through his gift of oratory, tracing back to his time as a bishop, archbishop, and cardinal in his home country. Published in English for the first time in their entirety and with contextual annotations, In Your Eyes I See My Words, Volume 1 collects his homilies and speeches from 1999 to 2004. Volume 2 spans from 2005 to 2008, and Volume 3, from 2009 to 2013, concludes with his prophetic last homily before his election to the papacy.

This illuminating collection presents an extraordinary opportunity to understand the vision of a great pastor. His words bear witness to the deep experience of faith among God’s people while also showcasing his own extraordinary ability to connect with communities of faith. Through these homilies and speeches, Pope Francis humbly displays his abilities as a wordsmith, a patient and attentive teacher, an inspired and faithful theologian, and a sensitive pastor uniquely attuned to his people, offering ready guidance for their journeys, but also journeying with them.

The first of a three-volume translation of Pope Francis’s theological, pastoral, anthropological, and educational thought provides rich insights into the mind and theological unfolding of a spiritual leader who has become beloved all across the globe. Within it we see Archbishop Jorge Mario Bergoglio―later Pope Francis―ministering to the needs of the people while also engaging with the political, technological, and societal forces affecting their daily lives. Here is an ecclesial voice not afraid to challenge the politicians, the culture-makers, and media moguls―even his own ordained and lay church ministers―to live a life of faithfulness marked by justice, equality, and concern for the needs of everyone, urging all to rely on the “vitality of memory” and the “recovery of hope.” In Your Eyes I See My Words also provides a glimpse into the political, social, and religious environment of Argentina and Latin America, providing a unique perspective on the issues confronting the faithful and how those issues motivated and nurtured Pope Francis’s understanding of the Church’s mission to all segments of society―particularly to those underrepresented and on the margins of history.