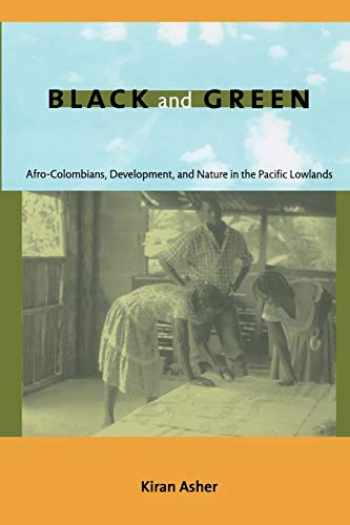 Black and Green: Afro-Colombians, Development, and Nature in the Pacific Lowlands

In Black and Green, Kiran Asher provides a powerful framework for reconceptualizing the relationship between neoliberal development and social movements. Moving beyond the notion that development is a hegemonic, homogenizing force that victimizes local communities, Asher argues that development processes and social movements shape each other in uneven and paradoxical ways. She bases her argument on ethnographic analysis of the black social movements that emerged from and interacted with political and economic changes in Colombia’s Pacific lowlands, or Chocó region, in the 1990s.

The Pacific region had yet to be overrun by drug traffickers, guerrillas, and paramilitary forces in the early 1990s. It was better known as the largest area of black culture in the country (90 percent of the region’s population is Afro-Colombian) and as a supplier of natural resources, including timber, gold, platinum, and silver. Colombia’s Law 70, passed in 1993, promised ethnic and cultural rights, collective land ownership, and socioeconomic development to Afro-Colombian communities. At the same time that various constituencies sought to interpret and implement Law 70, the state was moving ahead with large-scale development initiatives intended to modernize the economically backward coastal lowlands. Meanwhile national and international conservation organizations were attempting to protect the region’s rich biodiversity. Asher explores this juxtaposition of black rights, economic development, and conservation—and the tensions it catalyzed. She analyzes the meanings attached to “culture,” “nature,” and “development” by the Colombian state and Afro-Colombian social movements, including women’s groups. In so doing, she shows that the appropriation of development and conservation discourses by the social movements had a paradoxical effect. It legitimized the presence of state, development, and conservation agencies in the Pacific region even as it influenced those agencies’ visions and plans.