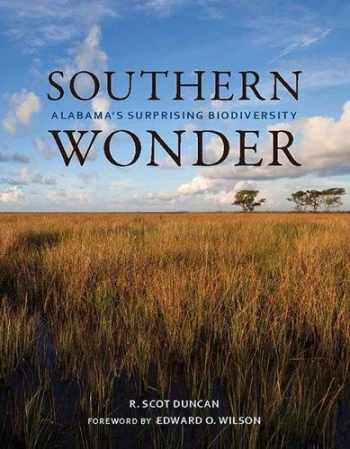 Acknowledged authors Duncan, R. Scot wrote Southern Wonder: Alabama's Surprising Biodiversity comprising 464 pages back in 2013. Textbook and eTextbook are published under ISBN 0817357505 and 9780817357504. Since then Southern Wonder: Alabama's Surprising Biodiversity textbook was available to sell back to BooksRun online for the top buyback price or rent at the marketplace.
Show more

Southern Wonder explores Alabama’s amazing biological diversity, the reasons for the large number of species in the state, and the importance of their preservation.

Alabama ranks fifth in the nation in number of species of plants and animals found in the state, surpassed only by the much larger western states of California,Texas, Arizona, and New Mexico. When all the species of birds, trees, mammals, reptiles, amphibians, fishes, wildflowers, dragonflies, tiger beetles, and ants are tallied, Alabama harbors more species than 90 percent of the other states in the United States. Alabamais particularly rich in aquatic biodiversity, leading the nation in species of freshwater fishes, turtles, mussels, crayfish, snails, damselflies, and carnivorous plants. The state also hosts an exceptional number of endemic species―those not found beyond its borders―ranking seventh in the nation with 144 species. The state’s 4,533 species, with more being inventoried and discovered each year, are supported by no less than 64 distinct ecological systems―each a unique blend of soil, water, sunlight, heat, and natural disturbance regimes. Habitats include dry forests, moist forests, swamp forests, sunny prairies, grassy barrens, scorching glades, rolling dunes, and bogs filled with pitcher plants and sundews. The state also includes a region of subterranean ecosystems that are more elaborate and species rich than any other place on the continent.

Although Alabama is teeming with life, the state’s prominence as a refuge for plants and animals is poorly appreciated. Even among Alabama’s citizens, few outside a small circle of biologists, advocates, and other naturalists understand the special quality of the state’s natural heritage. R. Scot Duncan rectifies this situation in Southern Wonder by providing a well-written, comprehensive overview that the general public, policy makers, and teachers can understand and use. Readers are taken on an exploratory journey of the state’s varied landscapes―from the Tennessee River Valley to the coastal dunes―and are introduced to remarkable species, such as the cave salamander and the beach mouse. By interweaving the disciplines of ecology, evolution, meteorology, and geology into an accessible whole, Duncan explains clearly why Alabama is so biotically rich and champions efforts for its careful preservation.

Published in Cooperation with The Nature Conservancy
Show more