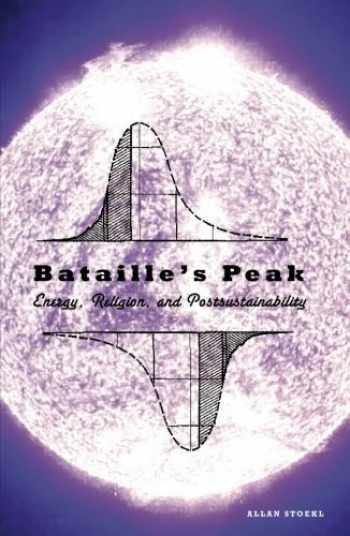 Acknowledged authors Stoekl, Allan wrote Bataille’s Peak: Energy, Religion, and Postsustainability comprising 280 pages back in 2007. Textbook and eTextbook are published under ISBN 0816648190 and 9780816648191. Since then Bataille’s Peak: Energy, Religion, and Postsustainability textbook was available to sell back to BooksRun online for the top buyback price or rent at the marketplace.
Show more

As the price of oil climbs toward $100 a barrel, our impending post-fossil fuel future appears to offer two alternatives: a bleak existence defined by scarcity and sacrifice or one in which humanity places its faith in technological solutions with unforeseen consequences. Are there other ways to imagine life in an era that will be characterized by resource depletion?

The French intellectual Georges Bataille saw energy as the basis of all human activity—the essence of the human—and he envisioned a society that, instead of renouncing profligate spending, would embrace a more radical type of energy expenditure: la dépense, or “spending without return.” In Bataille’s Peak, Allan Stoekl demonstrates how a close reading of Bataille—in the wake of Giordano Bruno and the Marquis de Sade— can help us rethink not only energy and consumption, but also such related topics as the city, the body, eroticism, and religion. Through these cases, Stoekl identifies the differences between waste, which Bataille condemned, and expenditure, which he celebrated.

The challenge of living in the twenty-first century, Stoekl argues, will be to comprehend—without recourse to austerity and self-denial—the inevitable and necessary shift from a civilization founded on waste to one based on Bataillean expenditure.

Allan Stoekl is professor of French and comparative literature at Penn State University. He is the author of Agonies of the Intellectual: Commitment, Subjectivity, and the Performative in the Twentieth-Century French Tradition and translator of Bataille’s Visions of Excess: Selected Writings, 1927–1939 (Minnesota, 1985).