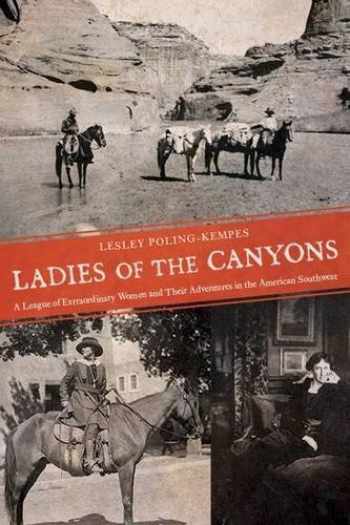 Ladies of the Canyons: A League of Extraordinary Women and Their Adventures in the American Southwest

WILLA Literary Award, 2016Reading the West Book Award for Nonfiction, MPIBASilver Medal, US History, 2016 IPPY AwardsWestern Writers of America Spur Award finalistLadies of the Canyons is the true story of remarkable women who left the security and comforts of genteel Victorian society and journeyed to the American Southwest in search of a wider view of themselves and their world.

Educated, restless, and inquisitive, Natalie Curtis, Carol Stanley, Alice Klauber, and Mary Cabot Wheelwright were plucky, intrepid women whose lives were transformed in the first decades of the twentieth century by the people and the landscape of the American Southwest. Part of an influential circle of women that included Louisa Wade Wetherill, Alice Corbin Henderson, Mabel Dodge Luhan, Mary Austin, and Willa Cather, these ladies imagined and created a new home territory, a new society, and a new identity for themselves and for the women who would follow them.

Ladies of the Canyons is the story of New Women stepping boldly into the New World of inconspicuous success, ambitious failure, and the personal challenges experienced by women and men during the emergence of the Modern Age. "Poling-Kempes's command of social history, cultural anthropology, and prehistorical archaeology is evident throughout this volume. The lives depicted in "Ladies of the Canyons" is yet another narrative of lives well lived and a reminder that no person is an island." -- Canadian Journal of Archaeology
"Poling-Kempes is an experienced writer of both history and fiction, and deftly weaves a clear and engaging narrative from what could have become an overwhelming barrage of people, places, and events"--The Journal of Arizona History