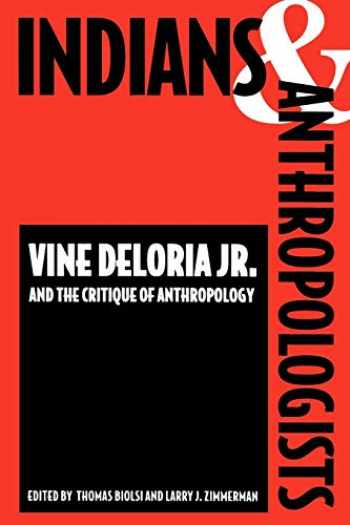 Indians and Anthropologists: Vine Deloria, Jr., and the Critique of Anthropology

In 1969 Vine Deloria, Jr., in his controversial book Custer Died for Your Sins, criticized the anthropological community for its impersonal dissection of living Native American cultures. Twenty-five years later, anthropologists have become more sensitive to Native American concerns, and Indian people have become more active in fighting for accurate representations of their cultures. In this collection of essays, Indian and non-Indian scholars examine how the relationship between anthropology and Indians has changed over that quarter-century and show how controversial this issue remains. Practitioners of cultural anthropology, archaeology, education, and history provide multiple lenses through which to view how Deloria's message has been interpreted or misinterpreted. Among the contributions are comments on Deloria's criticisms, thoughts on the reburial issue, and views on the ethnographic study of specific peoples. A final contribution by Deloria himself puts the issue of anthropologist/Indian interaction in the context of the century's end.

CONTENTS
Introduction: What's Changed, What Hasn't, Thomas Biolsi & Larry J. Zimmerman
Part One--Deloria Writes Back
Vine Deloria, Jr., in American Historiography, Herbert T. Hoover
Growing Up on Deloria: The Impact of His Work on a New Generation of Anthropologists, Elizabeth S. Grobsmith
Educating an Anthro: The Influence of Vine Deloria, Jr., Murray L. Wax
Part Two--Archaeology and American Indians
Why Have Archaeologists Thought That the Real Indians Were Dead and What Can We Do about It?, Randall H. McGuire
Anthropology and Responses to the Reburial Issue, Larry J. Zimmerman
Part Three-Ethnography and Colonialism
Here Come the Anthros, Cecil King
Beyond Ethics: Science, Friendship and Privacy, Marilyn Bentz
The Anthropological Construction of Indians: Haviland Scudder Mekeel and the Search for the Primitive in Lakota Country, Thomas Biolsi
Informant as Critic: Conducting Research on a Dispute between Iroquoianist Scholars and Traditional Iroquois, Gail Landsman
The End of Anthropology (at Hopi)?, Peter Whiteley
Conclusion: Anthros, Indians and Planetary Reality, Vine Deloria, Jr.
Show more