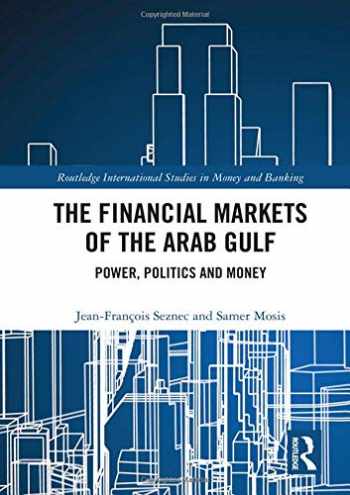 The Financial Markets of the Arab Gulf: Power, Politics and Money (Routledge International Studies in Money and Banking)

Financial markets across the Arabian Peninsula have gone from being small, quasi-medieval structures in the 1960s to large world-class groupings of financial institutions. This evolution has been fueled by vast increases in income from oil and natural gas. The Financial Markets of the Arab Gulf presents and analyzes the banks, stock markets, investment companies, money changers and sovereign wealth funds that have grown from this oil wealth and how this income has acted as a buffer between Gulf society at large and the newfound cash reserves of Gulf Cooperation Council states (Saudi Arabia, the United Arab Emirates, Qatar, Kuwait, Oman and Bahrain) over the last fifty years.

By assessing the development of institutions like the Abu Dhabi Investment Authority, the Saudi Arabian Monetary Authority, the Public Investment Fund and the National Bank of Kuwait, The Financial Markets of the Arab Gulf evaluates the growth of the markets and provides a detailed, critical, snapshot of the current form and function of the Gulf’s financial markets. It argues that the markets have been controlled by various state institutions for socio-political reasons. In particular, the Saudi state has used its sophisticated regulatory regime to push for industrialization and diversification, which culminated in the Vision 2030 plan. The UAE, Qatar, Kuwait, Bahrain and Oman have also been strongly involved in establishing modern markets for similar purposes but have done so through different means, with varying results, and each in line with what has been considered their respective comparative advantages.

Along with critically surveying these institutions and their role in global finance, the book also presents case studies depicting transactions typical to the region, including the highly profitable documentary credits of commercial banks, the financial scandal of certain financiers and their regulatory arbitrage between Bahrain and Saudi Arabia, a review of the Dubai’s trade miracle, and an assessment of the value and importance of the privatization of Saudi Aramco.