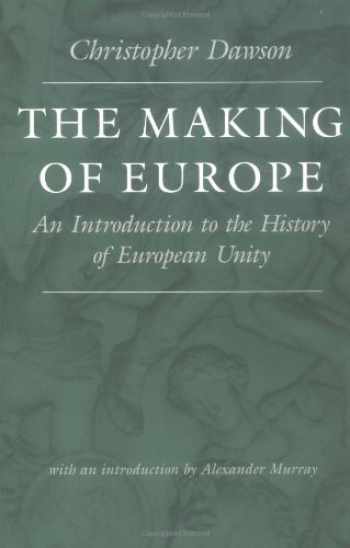 The Making of Europe: An Introduction to the History of European Unity (Worlds of Christopher Dawson)

In this seminal work, described by the Times Literary Supplement as "impressive alike by the authority of its learning and the originality of its argument," Christopher Dawson concludes that the period of the fourth to the eleventh centuries commonly known as the Dark Ages is not a barren prelude to the creative energy of the medieval world. Instead, he argues that it is better described as "ages of dawn," for it is in this rich and confused period that the complex and creative interaction of the Roman empire, the Christian Church, the classical tradition, and barbarous societies provided the foundation for a vital, unified European culture.

In an age of fragmentation and the emergence of new nationalist forces, Dawson argued that if "our civilization is to survive, it is essential that it should develop a common European consciousness and sense of historic and organic unity." But he was clear that this unity required sources deeper and more complex than the political and economic movements on which so many had come to depend, and he insisted, prophetically, that Europe would need to recover its Christian roots if it was to survive.

Glenn Olsen has noted that Dawson's point "was that the spread and history of Christianity had provided the narrative which had formed Europe and taken out of this narrative, Europe could hardly be spoken of as existing." In a time of cultural and political ambiguity, The Making of Europe is an indispensable work for understanding not only the rich sources but also the contemporary implications of the very idea of Europe.

PRAISE FOR THE ORIGINAL EDITION:

"The Dark Ages lose their darkness, and take on form and significance. Thanks to the author's erudition and marshalling of facts, we begin to have a notion of what it is all about."―Aldous Huxley, The Spectator

"Each chapter is a condensed philosophical survey of an important historical movement which profoundly influenced the course of civilization. Each chapter might stand alone, but taken in connections with the others it serves to round out a majestic picture of the slow development of a new order."―Commonweal