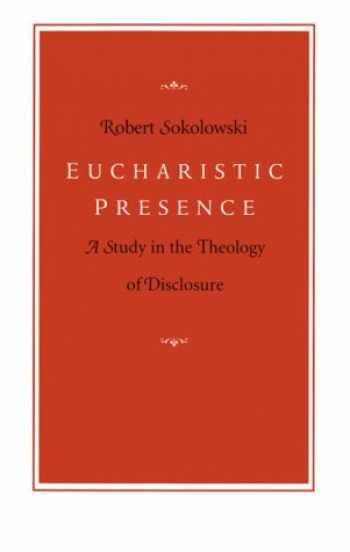 Eucharistic Presence: A Study in the Theology of Disclosure

In this insightful, interdisciplinary study, Robert Sokolowski uses the methods of phenomenology to examine Christian religious beliefs, particularly the sacrament of the Eucharist. In so doing, he comes to terms with many theological and cultural issues raised by modernity. Although the Eucharist is the center of focus, other issues in Christian faith are also examined, such as the Christian understanding of God, Creation, the Incarnation, Redemption, and biblical Revelation.

Sokolowski employs a method that he calls "the theology of disclosure," which studies the structures of appearance and should be distinguished from both positive and scholastic theology. He takes appearances as objective disclosures, not as mere psychological events. When discussing the Eucharist, he shows how it uses the form of quotation and how it draws on various temporal dimensions of human existence as it reenacts the sacrifice of Christ before the eternal Father.

These deeper themes are explored as necessary contexts for the Eucharist, which could not be properly understood except against the background of the Christian understanding of God as eternal and as Creator and Redeemer. The author provides a comprehensive theological treatment of major issues in Christian faith and does so with categories that are appropriate to our present intellectual and cultural world.

This study, which draws upon the work of many classical and contemporary theologians, especially Hans Urs von Balthasar, contributes significantly to speculative theology and to Eucharistic studies. It will be of great use to theologians and philosophers, as well as to students of Christian philosophy and sacramental theology.

Robert Sokolowski, a priest of the Archdiocese of Hartford, has taught philosophy at The Catholic University of America since 1963. He has written six books and numerous articles dealing with phenomenology, philosophy and Christian faith, moral philosophy, and issues in contemporary science. He has been an auxiliary chaplain at Bolling Air Force Base in Washington, D.C., since 1976 and was named monsignor in 1993.

"Indispensable for graduate and divinity programs with interests in Catholic theology and phenomenology of religions.―Religious Studies Review

"Intellectually stimulating. . . . The author contributes many insights to the theology of the Eucharist, some of which I had never seen before and found enlightening and moving. The depth of his scholarship is obvious."―Rev. James T. O'Connor, St. Joseph's Seminary, New York

"A careful reading of this profound analysis of the Holy Eucharist will be rewarded with a more fruitful participation at Mass. Here we find a modern model of the Catholic theologian who shows us in the concrete how to practice 'faith seeking understanding.'"―Kenneth Baker, S.J., Editor, Homiletic and Pastoral Review
Show more