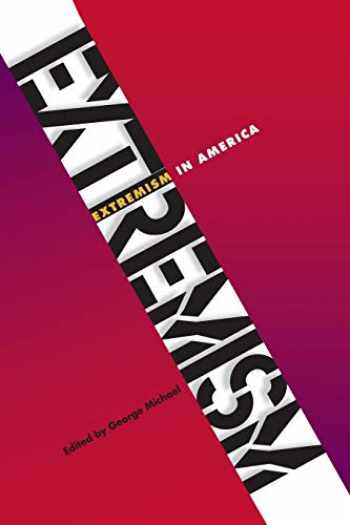 Acknowledged author wrote Extremism in America comprising 356 pages back in 2015. Textbook and eTextbook are published under ISBN 0813061989 and 9780813061986. Since then Extremism in America textbook was available to sell back to BooksRun online for the top buyback price or rent at the marketplace.
Show more

“A first-rate survey of the various strands of domestic extremism, from far left to far right, that are increasingly convulsing our country. A must-read for students, scholars, officials, and others entering this important field.”—Mark Potok, Southern Poverty Law Center

“With contributions on areas ranging from anti-abortion extremism to modern anarchism and black nationalism, this is a fascinating study of an often neglected and vital area of American politics.”—Martin Durham, author of White Rage: The Extreme Right and American Politics

The American Republic was born in revolt against the British crown, and ever since, political extremism has had a long tradition in the United States. To some observers, the continued presence of extremist groups—and the escalation of their activities—portends the fragmentation of the country, while others believe such is the way American pluralism works. The word extremism often carries negative connotations, yet in 1964 Barry Goldwater famously said, “Extremism in the defense of liberty is no vice.”

Extremism in America is a sweeping overview and assessment of the various brands of bigotry, prejudice, zealotry, dogmatism, and partisanship found in the United States, including the extreme right, the antiglobalization movement, Black Nationalism, Chicano separatism, militant Islam, Jewish extremism, eco-extremism, the radical antiabortion movement, and extremist terrorism.

Many of these forms of single-minded intolerance are repressed by both the state and society at large, but others receive significant support from their constituencies and enjoy a level of respectability in some quarters of the mainstream. The essays in this volume examine the relationship between these movements and the larger society, dissect the arguments of contemporary American anarchist activists, look at recent trends in political extremism, and suggest how and why such arguments resonate with a considerable number of people.