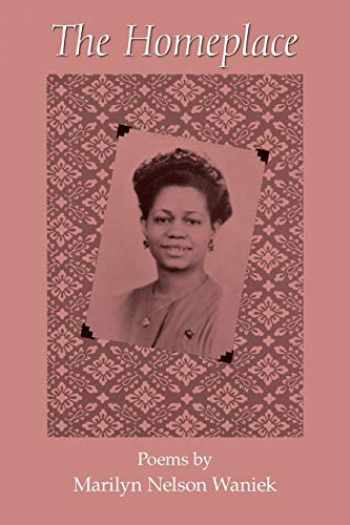 Acknowledged authors Nelson, Marilyn wrote The Homeplace: Poems comprising 64 pages back in 1990. Textbook and eTextbook are published under ISBN 0807116416 and 9780807116418. Since then The Homeplace: Poems textbook was available to sell back to BooksRun online for the top buyback price or rent at the marketplace.
Show more

Finalist for the 1991 National Book Award

In The Homeplace, the stories of a family become the history of a people as Marilyn Nelson Waniek sketches the lives descended from her great-great-grandmother Diverne.

The poet’s mother, Johnnie Mitchell Nelson, inspired this volume when she bequeathed to Waniek from her deathbed the tales that had shaped her life. The first section of the book presents those stories transformed into graceful, humorous, and deeply touching poems.

In the book’s second section Waniek honors her late father, Melvin Nelson, and tells the story of his “family”: the fabled group of black World War II aviators known as the Tuskegee Airmen. Using the language and perspective of her father and his comrades, Waniek explores through a few of their individual stories the hardships and achievements of the thousand black flyers trained at Tuskegee Institute.

Throughout The Homeplace, the reader is involved in a series of sharply portrayed lives. By telling a continuous story in a mix of free verse and traditional forms, Waniek gives her work pace and intensity. She handles the villanelle, the sonnet, and the popular ballad with equal skill and gusto.

“I just knew we were going to live some history,” Johnnie Nelson said at the end of her life. Her daughter has produced an eloquent homage to that history, celebrating the survival of Afro-American pride.