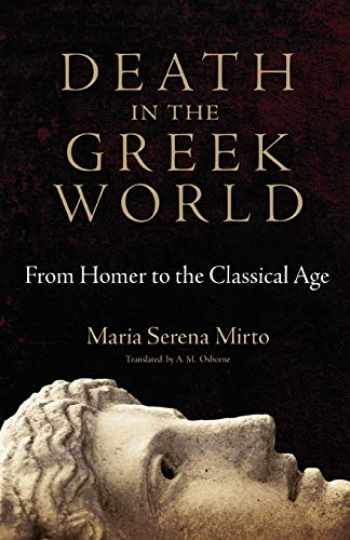 Death in the Greek World: From Homer to the Classical Age (Oklahoma Series in Classical Culture Series)

In our contemporary Western society, death has become taboo. Despite its inevitability, we focus on maintaining youthfulness and well-being, while fearing death’s intrusion in our daily activities. In contrast, observes Maria Serena Mirto, the ancient Greeks embraced death more openly and effectively, developing a variety of rituals to help them grieve the dead and, in the process, alleviate anxiety and suffering. In this fascinating book, Mirto examines conceptions of death and the afterlife in the ancient Greek world, revealing few similarities—and many differences—between ancient and modern ways of approaching death.

Exploring the cultural and religious foundations underlying Greek burial rites and customs, Mirto traces the evolution of these practices during the archaic and classical periods. She explains the relationship between the living and the dead as reflected in grave markers, epitaphs, and burial offerings and discusses the social and political dimensions of burial and lamentation. She also describes shifting beliefs about life after death, showing how concepts of immortality, depicted so memorably in Homer’s epics, began to change during the classical period.

Death in the Greek World straddles the boundary between literary and religious imagination and synthesizes observations from archaeology, visual art, philosophy, politics, and law. The author places particular emphasis on Homer’s epics, the first
literary testimony of an understanding of death in ancient Greece. And because these stories are still so central to Western culture, her discussion casts new light on elements we thought we had already understood.

Originally written and published in Italian, this English-language translation of Death in the Greek World includes the most recent scholarship on newly discovered texts and objects, and engages the latest theoretical perspectives on the gendered roles of men and women as agents of mourning. The volume also features a new section dealing with hero cults and a new appendix outlining fundamental developments in modern studies of death in the ancient Greek world.